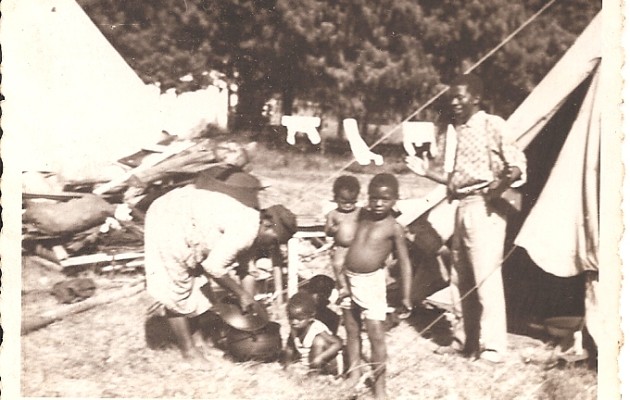 Mrs. MaZungu Khumalo (40) with four of her nine children, Thoko (3), Nomsa (8 months), Sizwe (8) and Richard (20) in front of one of the two tents near the graveyard in Vryheid that had become their home as from 13 February 1963 after their house and the whole village in nearby KwaBhanya had been bulldozed and everybody driven or carried away forcefully – some finding refuge [once more] as labour-tenants on farms – and others landing in the ‘reserves’, ‘bantustans’ – “homelands” further away.

In the years in which South Africans mark the centenary of the iniquitous Natives’ Land Act of 1913 of the times under colonial rule as “Union of South Africa” [1910-1961], note  is a timely reminder of the traumatic impact of forced removals on individuals and their families:

eMaThendeni/Vryheid, 1963: For the 8 year old Sizwe Khumalo the next school-term had just begun, when on February 13, 1963 the long envisaged destruction of the village KwaBhanya, in which Sizwe was born,  was – by order of the then white-minority regime – ultimately carried through.  The Apartheid regime had devised its “homeland”-policy, which – for the black-majority – meant nothing else but dispossession, eviction and deprivation of citizenship-rights.  Decades later Sizwe* still remembered so well:

Already the day before several neighbours had been ordered to leave and had been driven away to “reserves” far off.  By sunrise white soldiers had come again on big lorries and bulldozers and demanded that the people still remaining behind evacuate the village without delay.  Children, women and aged people that the squad could still find in the village were ordered to pack their belongings and load them on the lorries waiting nearby.  A chaotic scene: Terrified children and screaming babies, helplessly pleading and weeping mothers, pets and poultry running in panic all over,  loud voices and sounds of bulldozer-engines, flames, smoke and dust converted the once so familiar and protective home-village to hell!

The armed forces, their angry faces and commanding eyes and the monstrous tracked vehicles all over left no doubt that the eviction would eventually be carried out even more forcefully. Some people got injured; greater riots, however, did not take place.

Sizwe and his mother along with 5 of his altogether 8 brothers and sisters clambered on the back of the big lorry with the few belongings they could manage to rescue; then the lorry started moving.

The evicted villagers still had to witness how the bulldozers advanced and trampled down before their eyes all which had been home and had meant being at home to them.  The family graves on the yard, the vegetable-garden, the pets and poultry and the fruit-trees – all that had to remain behind; die once so familiar world of early childhood.

Along the fence around the graveyard next to the settlement for temporary workers and labourer-families, Bhekuzulu near Vryheid, the evicted were dropped.  For shelter they had to rent camping-tents from the municipal office responsible for administering displaced persons. Sizwe’s mother, MaZungu, managed to acquire two tents for her household of 11 persons, although only one tent per household – no matter how big – had been stipulated. 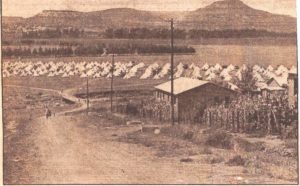 By sunset both tents had been pitched and the few belongings that could be rescued were piled together such that one could sit or lie among them in the evening.  Steadfast MaZungu stood among her little flock and tried to comfort, soothe and cuddle them.  Sizwe’s father , who – like almost every other black adult in Apartheid times – had to work far away from home, found his wife and children in the camp for evicted and homeless persons near the Bhekuzulu graveyard when he was some weeks later allowed to take short leave and travel home.

The village KwaBhanya had been disbanded and the area where it had been thereby become „white“  – was divided among the white landowners as additional grazing land to the farms „Schaapkopje“, „Nooitgedacht“, „Welgeluk“.  The “black spot” had at last been eradicated from the map; the policy of Bantustans – the homeland policy – could further be pursued. 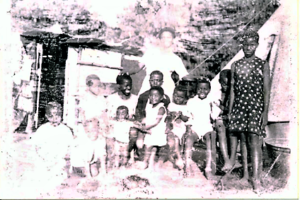