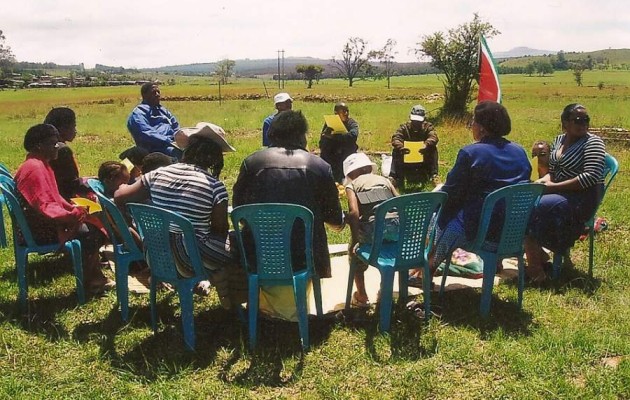 The findings and long-term results relate to and influence processes of indigenous knowledge in and around institutions of learning and research throughout the country, the sub-continent and abroad.

Competent and reliable orientation on specific issues relating to liberation processes in pre- and post-colonial Southern Africa for purposes of public discussion, research, policy-making and –implementation shall be aimed at.

The exchange of opinions occurs per correspondence and occasional seminars.

Oral and written records shall be gathered and made available to a team of scholars and interested persons for evaluation, research and common accessibility.  This inter-disciplinary research-program lays emphasis on a scholarly approach on the one hand and a grass-roots/field-work approach on the other.

The scope of interest embraces a wide range of issues dating back far beyond the legendary 1652 marking the beginning of colonial history in Southern Africa.  Some of these are:

An overall pattern shall guide specialised focus on regional or periodical facets of the liberation processes under review.  Each such regional or periodical aspect (e.g. ` impi yaseNcome <`The Battle of Bloedrivier/Blood River´> 16th December 1838´  –  ) shall, while in its own right being a rounded-up unit, remain capable of being incorporated in the diversity of a growing Indigenous Knowledge System (IKS).

The Forum `Liberatory Proceses in pre- and post-colonial Southern Africa´ shall be convened and co-ordinated by a post-graduate scholar with inter-disciplinary experience, acumen and interest in indigenous knowledge systems of Southern Africa.

The Convenor seeks co-operation with scholars of relevant disciplines at local and international universities, conduct grass-roots-research on oral history, motivate learners to take interest in history research, engage in comparative studies on the issue and convene consultations and annual seminars on on-going or concluded themes of research and public interest.  A team of researchers and field-workers shall be engaged.  The Convenor reports continually on the progress.

The Forum `Liberation Processes in pre- and post- colonial Southern Africa´ remains an on-going pursuit beyond the interim phase 1996-2006.

The Forum operates as follows:

The Convenor continues reading and researching on published and unpublished sources of history and political systems involving local and international scholars and avail his interim findings and long-term results for academic and purposes.

Accounts on incidents and events not yet recorded shall be gathered and made available to a team of scholars for evaluation, research and common accessibility.  These relate to spheres of Indigenous Knowledge Systems (IKS) still to be explored and developed.

Descendants of the indigenous peoples of Southern Africa in the Western, the Northern and parts of the Eastern Cape and other parts of Southern Africa today (“(descendents of) hunter-gatherers”)[1], and descendants of the survivors of the Anglo-Boer South African War (abaQulusi, Bakgatla, amaMfengu, `Indians´,  …) shall be interviewed, their songs, idioms, memories and rituals be recorded by teams of researchers and `field workers´ for purposes of analysis, research and common accessibility.

The analysis of individual and collective contributions towards liberation processes in this and similar facets of pre- and post-colonial Southern Africa would gain in depth and substance through the results of such grass-roots-research.

Learners and students shall be motivated to take interest in history.

The learning and teaching of history shall be promoted by highlighting events of local significance (e.g. Sekhukhuni and the Voortrekkers; Sikhobobo wakwaSibiya and the `Bittereinders´) and initiating discussion and debate on these.

Post-graduate research under accredited guidance shall be promoted.

Suitable applicants shall be recommended for bursaries and scholarships.

2   Encounter (with) and Exchange of ideas and experiences

Learning with and from each other intra-culturally (among the different communities in the various regions of Southern Africa) and internationally (together with people from other regions in Africa and abroad) some of whom are engaged in a similar undertaking of revisiting history with new eyes and new ears (for example: Namibia/Germany, “British Kaffraria”/Great Britain, “Nieuwe Republiek”/eBaQulusini).

Reading and researching at a particular venue in co-operation with scholars of relevant disciplines shall go hand-in-hand with field –work on oral history and discussions with learners and teachers on local and regional themes as well as comparative studies and cultural exchange.  These are all spheres of one and the same pursuit.  The Convenor shall continually bear this in mind throughout the implementation of this interdisciplinary venture.

Consultations for planning and evaluating as well as an annual seminar for academic and implementary purposes shall be accompanied by a Journal publishing certain questions and findings and promoting public interest in These.

[1] Gerrit Brand (2009): the word “Khoisan” is a colonial term with no basis in the indigenous languages and conceptualities of the people to which it is supposed to refer. The word “San”, which means “thief”, was used derogatively by the Khoi to refer to hunter-gatherers. “Khoisan” as a term was introduced by colonial anthropologists to refer to the Khoi and the San together. The word “Bushmen” (Dutch: “Bosjesmannen”; Afrikaans: “Boesmans”), which is often seen as a negative term by non-members of the community in question, even though members of the community often use this term proudly to refer to themselves, is a translation of the name that one hunter-gatherer community gave themselves. It refers, in an honorary fashion, to this group’s exceptional knowledge of the medicinal qualities of various indigenous plants (“bushes”). In general, therefore, it is better to refer to the group in question, either by the names of their separate sub-groupings, or as “(descendents of) hunter-gatherers”, or as Bushmen.