Tutu forced to quit over lesbian-marriage 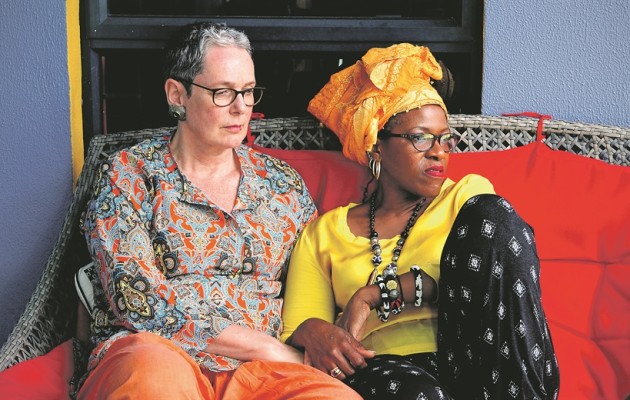 CAPE TOWN, 22 May 2016: Reverend Canon Mpho Tutu-Van Furth has revealed that her licence to preach is being revoked because she married a woman – so, she has decided to quit instead. Biénne Huisman* reports:

Newlyweds Mpho and Marceline Tutu-Van Furth are on honeymoon on the Indian Ocean island of Bali after their wedding at a Franschhoek wine-estate attended by Mpho’s parents, Leah and Archbishop Emeritus Desmond Tutu.

“Bali is quite magical,” said Mpho in an email to City Press, adding that she had decided to “give up” her ministerial duties – her authority to preside at Holy Communion, and to officiate at weddings, baptisms and funerals in South Africa.

“Because the South African Anglican Church does not recognise our marriage, I can no longer exercise my priestly ministry in South Africa,” she said. “The bishop of the Diocese of Saldanha Bay [Bishop Raphael Hess] was instructed to revoke my licence.

“I decided that I would give it to him rather than have him take it, a slightly more dignified option with the same effect.”

While same-gender marriage was legalised in South Africa in 2006 [in compliance with the Constitution which explicitly prohibits discrimination including discrimination on grounds of gender- and/or sexual identity], the South African Anglican law on marriage states: “Holy matrimony is the lifelong and exclusive union between one man and one woman.”
Debate over same-sex marriage is dividing the Anglican Church around the world and, in South Africa, Mpho and Marceline’s high-profile union has brought the issue to a head. The couple legally tied the knot in Marceline’s home country, the Netherlands, in December. Soon after, Cape Town’s Archbishop Thabo Makgoba indicated that pastoral guidelines for same-sex marriage would be reconsidered in September.
Makgoba could not be reached for comment this week. His office manager, Wendy Kelderman, said he was away on a retreat.

Desmond Tutu said this week that Makgoba allowed him to give his daughter and her bride a “father’s blessing”.

“Archbishop Thabo permitted me to give the couple a father’s blessing, which we hoped would not be misconstrued as pre-empting decisions of the Provincial Synod, the church’s highest legislative structure,” he said.

Mpho pointed out that despite their obvious differences, ironically, it now is her and Marceline’s sameness that was causing distress.

“Ironically, coming from a past where difference was the instrument of division, it is our sameness that is now the cause of distress. My wife and I are both women,” she said.

Mpho said she and Marceline had been confronted with gender-stereotypes, and the one that irked her most was the “who’s the man in the relationship?”-question. She also criticised skewed power-relationships in households and abusive men in South Africa.

“In the South African context, one could also ask: ‘Who gets to have multiple sexual partners (in or out of wedlock), and who gets to be drunk and violently abusive to his/her partner with little fear of religious sanction and no cultural consequence?’

“We have decided that we will both be the woman in the relationship. We meet as mutually respectful equals who enjoy working together.

“Neither of us stays home. Both of us enjoy cooking. We share responsibility for cleaning and employ domestic workers. Parenting our four children on two continents is a joy and a challenge. Our marriage is for our mutual joy and support. We have decided to forgo the violence and infidelity.”

She added that she was still a priest in good standing in the Episcopal Church in the US, where same-gender marriage is recognised. Marceline is a professor of paediatric infectious diseases at the Vrije Universiteit Medical Centre in Amsterdam, while Mpho has been reinstated as executive director of the Desmond & Leah Tutu Legacy Foundation in Cape Town.

They have described their relationship as a “laptop love affair”, saying the distance had done nothing to quell their passion.