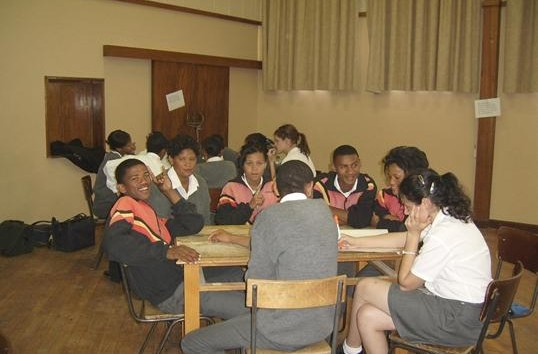 GRAHAMSTOWN, 27.02.2016: During the transition to democracy in the early 1990s, the media in South Africa underwent a shift in their operations and understanding of what their role in society was to become.

The result was a strong move towards a normative ideal of a watchdog media, which would work in the interest of “the public” by exposing the shortcomings of the new government.
Community media – both print and broadcasting – emerged as a key sector after 1994, targeting smaller communities and working within a developmental space to provide local information, news, entertainment and engagement.

But, our research in the Eastern Cape in South Africa, found many young, black and poor South Africans do not recognise themselves or their communities in the stories they see, hear or read in the mainstream media.

While young people have high levels of trust in the media, the failure of the media to listen to people place a barrier between the media they consume and their lived experiences.

The Eastern Cape is the second poorest province in the country. It is plagued by an inadequate education system, poor local government performance and frequent reports of corrupt public officials.

The majority (65%) live in rural areas and more than half of households live below the poverty line. Just over 40% of 15 to 34 year olds are unemployed. They lack access to quality mainstream print media and rely mainly on the South African Broadcasting Corporation television and radio for news and information needs.

Previous research among Eastern Cape youth shows those who have access to the internet actively use it for relevant news and information. Despite high levels of consumption and trust in the mainstream media, the participants almost unanimously agreed that the news lacked relevance to their lives. The media are failing to listen to their daily challenges.

Young people are marginalized by political and social structures that are unable to uplift them. The media add to this marginalization by failing to engage with the youth and poor communities.

For example, research on the coverage of education stories in South African newspapers shows that they lack the voices of young people. This, despite them being the key beneficiaries of the education system.

Given their myriad challenges, many young people succumb to a sense of hopelessness. Others find alternative avenues for speaking and being heard (including voting, protest and petitions).

The South African media’s lack of listening is not unique. Journalism globally tends to ignore the experiences and stories of the marginalized, which include young people.

Active listening for journalists would move beyond simply representing a community of people, or acting as the “voice of the voiceless”. It entails providing a space where a community can speak out and receive attention.

Young people, mostly referred to as the “Born Frees” in South Africa, are often stereotyped as the

° “lost generation”,
° unemployed, or unemployable, and
° not looking for employment because they prefer the welfare provided by the state.

Without a willingness to listen to both individual and group voices, the media will continue to regard the youth as “a stereotyped object” rather than a “conscious, active subject”.

To understand listening processes and possibilities, we interviewed editors and producers of commercial and community media across diverse platforms. This resulted in three classifications of media – those that adhere to the commercial imperative, those that spoke to the people, and those that pioneered listening.

There are several reasons for the media disregarding the youth. These include:

° their commercial needs drive programming and engagements with audiences,
° audiences are treated as consumers of media products, not necessarily citizens,
° news programming has a traditional approach, speaking to and for the audience,
° the journalists set the agenda on behalf of their audiences.

These media outlets are aware that their market is affected by access to social media. However, there is no research into this trend to show where young people are placed and there is still a strong reliance on traditional media methods to engage audiences.

To their credit, some media outlets have focused on local content. There is also a strong political commitment to helping people deal with problems.

‘Speaking to the people’

We detected a stronger commitment among community newspapers to truly serve communities they report on, with the commercial imperative somewhat receding.

There is hyperlocal programming and content. Full time journalists and freelancers live in the communities they cover and propose story ideas from their locations.

The newspapers are free because people in the areas they cover cannot afford to pay. They are conscious that listeners and readers may not have high levels of education so the content is made especially relevant.

Generally, they have a stronger consciousness of the harshness of people’s lives and an emphasis on providing “positive … inspirational stories that speak to the people”.

The concerned media make deliberate use of local languages (isiXhosa and Afrikaans). The radio stations take advantage of their medium to invite local officials into studios to answer questions raised by their audiences.

The most interesting approach is one we call “pioneering listening journalism” which is attuned to a local context.

One feature is to invite municipal councilors and officials to public meetings to address issues. Community and church leaders are used as mediators in these meetings.

The benefit of such meetings is the invaluable knowledge city officials gain about situations and opinions they usually have little contact with. Another value is that officials get to explain processes of governance. They develop an understanding of what lies behind the ongoing protests over the provision of public services.

The commercial imperative discourages listening journalism. Journalists in many newsrooms continue to communicate with their readers and audiences in the same routinized ways, despite the radically altered political and social space in South Africa. Moreover, despite the disruptions caused by digital and social media.

Where listening has become imbedded in a journalism operation it is usually driven by one individual who has the power and authority to make it happen and who is keenly aware of the political nuances of a local situation.

The impetus for listening is usually driven by a desire to understand a local situation and to build a strong loyal relationship with a particular readership or audience. The impulse is also a social justice one – to take responsibility for redressing societal inequalities.

This research was supported by a grant from the National Research Foundation.