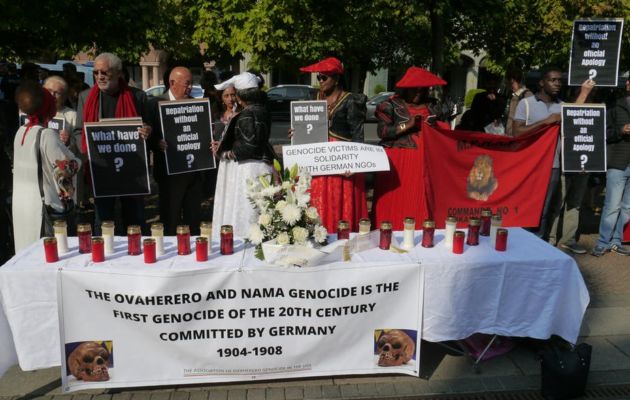 BERLIN | WINDHOEK, 04.09.2018: Human remains kept by German institutions as part of their colonial loot were repatriated to Namibia at the end of August 2018 – the third time this has been done. Once again, the process was marred by serious friction, a clear illustration that both the German and Namibian governments have not come to terms with the problems involved. Reinhart Kössler* and Henning Melber* report:

Most human remains that had been taken from Namibia were from people killed during the genocide between 1904 and 1908, or related atrocities under German colonialism. It’s not known how many such remains are still in German “collections”.

But their repatriation cannot be de-linked from the need by Germany to admit to its colonial, state-sponsored crime. And the former colonial power has yet to take what’s needed to provide redress.

It took a full century after its colonial dreams of empire ended for Germany to accept – and then reluctantly – responsibility for the traumatic past. Only in July 2015 did the foreign ministry confirm that the term “genocide” was applicable to what happened in then “German South-West Africa”. This was finally confirmed as official policy a year later.

But bilateral negotiations remain at an impasse. The main unresolved issues are the full recognition of the genocide, an appropriate apology and a willingness for redress on the side of Germany.

During the ceremonies around the restitution of remains, German official pronouncements once again remained evasive. This means: no formal recognition of genocide, no official apology, and no mention at all of any redress.

On 29 August, 27 human remains were handed over. The solemn ceremony took place in a prominent Berlin church. The speech by Michelle Müntefering, Germany’s Minister of State at the Federal Foreign Office, offered no deep apology. At the end, she “bowed in deep mourning” and asked, “from the bottom of my heart for forgiveness”.

Such wording does not go beyond the individual remorse offered in 2004 by German Minister Heidemarie Wieczorek-Zeul. And Müntefering again resorted to a quaint wording that obfuscated Germany’s responsibility for its actions, saying

atrocities committed then in the German name were, what today would be termed a genocide.

Such verbal acrobatics seeks to stress that international law on genocide would not apply to the deeds of 1904-1908, thereby dodging any claims to reparations.

Reparation claims are pursued both by the Namibian government and separately by descendants of the main victim groups who feel they aren’t adequately represented in the bilateral negotiations between the governments. The actions by agencies of Ovaherero and Nama include a widely observed court-case in New York.

The contested “G-word”, and its implications for reparation claims, were not the only sensitive issue. Before the handover of human remains was consummated, conflicts cropped up because of the approach taken by both governments.

In an obvious attempt to keep a low profile on the side of the German state, the ceremony was made the responsibility of the German Protestant Church, acting jointly with the Namibian Council of Churches. Participation in a vigil was restricted to personal invitations. This violated the fundamental principles of Christian sermons being open to all.

Representatives of the independent Ovaherero and Nama agencies as descendants of the victim groups were only allowed at the last minute to occupy some space in the ceremonies. They voiced their frustration accordingly. As Paramount Chief Rukoro stated on their behalf:

How do you – the organisers of this event – think of us, Herero and Nama leaders, that our staunch supporters who were responsible for discovering these remains, are kept outside while we are locked up inside and standing next to members of the very church that has committed genocide against our people? Don’t you ever have respect for our feelings?

Nor did ongoing tensions abate in Namibia. The human remains were repatriated in the company of Müntefering and the German special envoy to Windhoek. On 31 August a ceremony took place in the Parliament Garden with Namibia’s vice president as the keynote-speaker.

While all participants were at pains to maintain decorum, divergent concerns were strikingly articulated. Vice president Nangolo Mbumba followed his government’s line in stressing national unity. He emphasised the need for reparations. Recognising the contribution of the affected communities, he reminded them that the human remains left Namibia when it was a colony. They were now returned to a democratic country under a constitution.

The representatives of victim communities went further, insisting on a formal apology and reparations. Even the Ovaherero group that cooperates with the government negotiations and Namibia’s special envoy, stressed they would evaluate any result against these essentials.

Müntefering, for her part, mainly repeated her former speech.

This third repatriation of human remains – the others were in 2011 and 2014 – was another missed opportunity to move closer to some serious reconciliation between Germany and Namibia.

In Berlin Müntefering told reporters, that Germany still has a lot of catching up to do in coming to terms with our colonial heritage.

This challenge remains, and the descendants of the victims will continue to demand justice. Germany and Namibia remain a far cry from true reconciliation.