Antjie Krog has forged a unique positon within South African literature. As a journalist, poet and writer she has penned a consciously self-reflective and critical body of material that, in the words of Anthea Garman, seeks to engage `with the newly-recognised Others of South Africa´. Continuing to praise Krog’s work as not simply a `classic performance of oppositon´, Garman argues it is instead a singularly tight intermingling of personal and political through, a demonstration of how `an individual in a complex, rapidly-altering political situation, negotiates an adaptive subjectivity as the primary means of ethical agency´. This said, in doing so, Krog has arguably irritated many readers. Max du Preez has gone so far as labelling her third book Begging to be Black, a case of `identity suicide´ owing to the increasing sense of guilt and shame she, as an [Afrikaans-speaking white South African], experiences over apartheid. I [Tom Penfold*] admit, I share similar frustrations over what occasionally borders on a developing over-indulgence of her own personal liberal sensibilities at the cost of an exploration of the very necessary issues she wishes to tackle. There has, perhaps, been too much ‘I’. 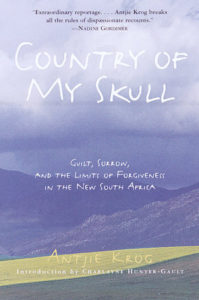 Krog found prominence through Country of my Skull, a superb study of South Africa’s Truth and Reconciliation [Commission] (TRC) and her place within it as journalist and citizen. Her latest work, Conditional Tense, broadly represents a successful return to these strengths and a move away from the highly personalized narratives she has penned in the intervening years.

The book is divided into 11 chapters, which, through a variety of focuses, link together in expressing a need to critically re-examine the workings and effects of a TRC-process that has become `astonishingly misunderstood, mishandled and mistrusted ‘by political parties and the majority of South Africans (4). Through this analysis Krog develops the concept of interconnectedness-through-wholeness to replace the dominant definitions of ubuNtu – which, she argues, have become increasingly compromised by competing political agendas – and, also, attempts to come to terms with the country’s continuing failure to develop a new vocabulary for a new South Africa, one that moves beyond `right´ or `wrong´ and allows us `to talk about ourselves or the disgraced in terms of hope and an ethic of care´(38).

The concept of interconnectedness-through-wholeness, explicitly developed only halfway through the book in Chapter Six, demands a rethinking of both forgiveness and reconciliation. These notions have long been held up as discrete categories achieving different effects. However, Krog’s alternative posits that they `can never be separated´ and are `mutually dependent´. In order to `grow into one’s fullest self the deed of asking forgiveness, and forgiveness itself, needs to lead to recovery, reconciliation and, eventually, a fuller personhood´ (197). This understanding of forgiveness is grounded in African philosophy and less so in Christian morality. While the latter – which for many critics of the TRC became a political `wrapping´ to help sell proceedings to the wider population – represents forgiveness with the goal of individual gain, that is the gaining of personhood and salvation in heaven, interconnectedness-through-wholeness represents forgiveness through communal change (195). Granting forgiveness, in this sense, allows the perpetrator to regain the humanity they lost through their actions. Moreover, the act of offering forgiveness and allowing another to change allows the victim the possibility of becoming fully human again, of regaining the part of their humanity taken away by suffering.

This distinction is central to Krog’s project in Conditional Tense. It leads to a fundamental reinterpretation of the TRC’s project that moves away from individualistic gain – of `being let off the hook´ or receiving `reparation´ – towards one that hoped to fundamentally change the lives of perpetrators and victims, allowing all to regain their place in the caring community of humanity (211, 27). Furthermore, it impacts significantly on two issues that continue to divide contemporary South African society. First, along with the joint failure of the TRC und the [governing] African National Congress (ANC) to interact successfully throughout the commission – something that led to reduced accountability, a muted discourse of compassion, and an unconstructive handling of the reparations issues (see Introduction) – the role of interconnectedness-through-wholeness explains much of the anger around reparations now being exploited by South Africa’s radical left. Krog justifies this as

arising from
a lack of `change and wiedergutmachen [making good again]’
displayed by perpetrators
despite the opportunity offered them to do so
(217).

Second, as she discusses in `A Vocabulary of Grace´, one of the strongest and most poetic chapters of the book, this concept explains the readiness to forgive the growing number of political misdeeds committed by South Africa’s elite. For Krog, the deed is not `wiped out´ but instead there is a willingness `to listen to the appeal of the disgraced to become […] part of the community of respectable citizens` (253). The importance of this in explaining [President Jacob] Zuma’s precarious position in early 2016, for example, should not be overlooked.

Krog is able to develop her theory of interconnectedness-through-wholeness by undertaking a close re-reading of several testimonies given to the TRC. This skill and the linguistic subtlety on display in these analyses are the book’s highlight, which is best showcased in the first three chapters. Chapters One and Two seek to explain the `impenetrable´ testimony of Mrs Konile, a mother of one of the Gugulethu Seven, by subjecting it to three distinct readings (42). Working with two colleagues who each approached the testimony in different ways, Krog addresses how translation can cause `devastating misunderstandings´ or `opportunities for enhanced understanding´ (40). This example demonstrates how a failure to pay sufficient attention to translating the significant cultural ways undergirding language-choice along with an inability to record nonverbal utterances – something that needed to be understood given how pain destroys language and is returned to in Chapter Three – prevented the audience from appreciating, and the TRC from recording, the true pain and feelings of many victims. Conditional Tense provides sharp insight into how the ability to re-read narratives in more critical and culturally diverse ways can change misgivings and establish empathy where it was previously missing. To do so, Krog argues, is necessary to not only fully appreciate the successes of the TRC but also to establish a space for `strangeness´, a space where diversity and tolerance can speak in a society that for so long has been riddled by internal division and misunderstanding (114).

Conditional Tense also presents a re-reading of a range of other texts unrelated to the TRC. These include an analysis of the Dutch comic Suske en Wiske, through which Krog again underscores how western individualism does not sit with African interconnectedness. She, also, demonstrates her belief that Nelson Mandela has been `honoured in ways that emaciate, distort and even destroy the very things he stands for´ (260). While I largely agree with her textual analysis, it strikes me as serving a particularly narrow political agenda. She concludes her analysis by suggesting `a reason the powerful in the world need an over-representation of the Mandela-as-forgiver-icon: he is used to keep the conditions of the privileged intact.

Through him [Nelson Mandela]
we can
talk tolerance while doing the opposite´
(Antjie Krog, 282).

I do not argue with her reasoning other than it appears to gloss over the larger point that South Africa, at a time of growing popular dissatisfaction, has seen both ideological sides of the debate search for political purchase by coining a new currency of misrepresented icons bordering on political iconoclasm. This seems an oversight in a book that otherwise writes towards inclusivity.

It is Krog’s meditations on subjects away from the TRC that possibly prove more contested. Aside from her discussion of Mandela, she also, for example, re-interprets the release and popularity of the `De la Rey´-album in 2006. Arguing against it being seen `as an ethnic call for [Boer] uprising´, she returns to dwell on the sense of guilt that characterises her other writings (177). Her reading of `De la Rey´ is focused on the omission of apartheid form lyrics that otherwise conjure notable moments in [Boer] history. This silence, she claims, illustrates disavowal; the song, as a whole, represents the difficulties of young [Afrikaans-speaking white South Africans] shaping a new identity and creating a space where they can successfully redefine themselves. For Krog, the reaction to the song’s release represented a rejection of this attempt; `a desire [Afrikaans-speaking white South Africans] should not be allowed to escape the bondages of shame´, that is likely to mean a return to old trajectories (190). Such an analysis raises troubling questions about the current state of South Africa and ones that need addressing.

Conditional Tense is a book of missed chances. In many ways, each chapter depicts its own separate `1994 moment´. Krog’s re-reading of these instances testifies to the possibility of `profound and inclusive change´ denied by a South Africa that has failed to cross borders and truly attempt to understand (2). Conditional Tense convincingly situates these failings as beginning with the TRC, an event that represented `a golden opportunity lost, not only to find a motor to materially change South Africa, but also to mould a caring South African-ness´(28). The language of community and tolerance crafted by Desmond Tutu has slowly been destroyed through successive presidencies, which has left Krog, at least, feeling `completely alone´(321). And, while this book does have limitations and occasionally sees Krog slip back into her usual tone of lament and self-indulgence, for the most part it is successful in its project. For any scholar of the TRC it is a must-read, for any historian keen to challenge narratives and explore discourses in new ways, it provides a useful example.

Reinforcing my view that Krog’s writing raises important political questions sometimes compromised by a personal subjectivity, I do find much of what is said here worth considering. Though I have a feeling, Max du Preez would cite this work as another example of Krog’s own`begging to be black´ with its attempted privileging of African philosophy over [`Western´] thought, its turn to interconnectedness-through-wholeness over individuality, perhaps South Africa’s new vocabulary should borrow a phrase or two. I cannot help but think, its current lingua franca has done little to neutralize this `toxic mix we have become´ (175).