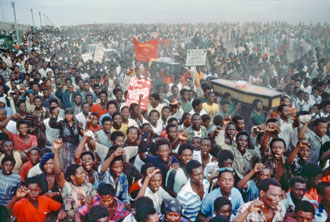 South Africa’s Human Rights Day originates from and is linked with 21 March 1960 – the ‘Sharpeville Massacre’:  On that day 69 people died and 180 were wounded when police fired on a peaceful crowd that had gathered to protest against oppression under the apartheid-regime.

The United Nations Organisation [UN] observes 21 March as International Day for the Elimination of Racial Discrimination.  “Learning from historical tragedies to combat racial discrimination today” is the theme of a panel-discussion to be held at the UN in Geneva on Friday, 20 March 2015.

Civil rights’ organisations in South Africa and world-wide address on 21 March incidents of the violation of human rights locally and abroad (amongst others: the Marikana Massacre 16 August 2012) and call for justice.