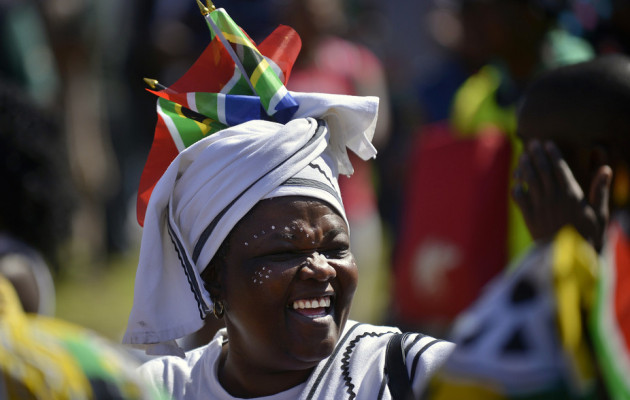 A woman cheers during Freedom Day celebrations in South Africa

PRETORIA, 27. April 2016: More than any other public holiday, South Africa’s Freedom Day serves as a symbol of how far the country has come since its historic elections in 1994. Dirk Kotze* gives some of his observations:

The country’s peaceful, negotiated transition from an apartheid past earned it international acclaim. It represented the new values of inclusive politics, reconciliation and transitional justice, social transformation, human rights and constitutionalism.

South Africa’s struggle against colonialism was arguably the longest in Africa. Zimbabwe’s independence in 1980 and the impact of the end of the Cold War on southern Africa – in the form of Namibia’s independence (1990) and the peace process in Angola – all contributed towards South Africa’s democratisation in the early 1990s.

The state of democracy

The African National Congress (ANC) still dominates electoral support. But it has come under increasing public criticism and the political narrative has turned against it.

Most domestic political discourse is centred on President Jacob Zuma. This includes the Nkandla-furore over the use of public money to upgrade his private homestead. He is also mired in allegations of “state capture” by his friends the Guptas, as well as factionalism in the ANC.

The governing party finds itself in a major crisis sparked by divisions over Zuma’s continued leadership. This follows the unfavourable Constitutional Court judgment on Nkandla.

The ANC’s dominance since 1994 has limited the space for creative opposition, which remains small and fragmented. Nevertheless, since 2009 the governing ANC has lost support in all elections.

The Democratic Alliance, the official opposition, has grown with each election. Smaller parties have all been in decline, with the exception of the radical Economic Freedom Fighters. But it has only contested one election and the 2016 local polls will give a good indication of its real strength.

The increasingly prominent role of parliament, particularly how the opposition uses it, is also very relevant.

State of the judiciary

The separation of powers and rule of law principles define the judiciary’s role in society and its independence. The judiciary is fulfilling its mediatory function between opposition parties, parliament and the executive.

The courts’ interpretative role of legislation and the constitution plays an increasingly important role in domestic politics. In the process it enhances the judiciary’s independence and the constitution’s supreme status. This has not always endeared it to the governing party, which has accused it of being untransformed.

Besides the judiciary, Chapter 9 institutions are mandated to support constitutional democracy. Of these, the Public Protector has developed into the main body for the public and other parties to investigate abuses of state power or unethical conduct.

By contrast, the Electoral Commission of South Africa is receiving attention for all the wrong reasons. Worryingly, the recent annulment of a by-election reflected negatively on the commission’s independence and administrative competence.

The electoral body is one of the main guarantors of the 1994 legacy. Any doubts about its independence will be a serious setback for the trust South Africans have developed in the democratisation process.

State of the economy

The lacklustre-economy is a major source of worry. Poverty, unemployment and inequality remain stubbornly high.

Economic growth is affected by a number of negative factors. The main ones include the quality of education and training, uncertain power supply, insufficient broadband for small enterprises, inefficient state-owned enterprises, policy uncertainty and a rigid ideological approach to the economy.

State of `delivery´ of basic services

Delivery of basic services has been a daunting task. People in many parts of the country have lost patience with the government and have increasingly embarked on protests over the past decade.

The government regularly presents statistics about increased infrastructure but the quality of services to accompany these does not always improve. Government has embarked on a “back to basics”-plan aimed at addressing some of the most pressing problems. These include a lack of managerial skills, too much party political interference, financial problems and a tradition of non-payment for services.

Most economic decisions depend on international endorsement by financial markets, credit rating agencies and investors. This limits the options open to government to deliver on its promises. Zimbabwe learnt this lesson the hard way.

Arguably the departure point could be that South Africans try and reach consensus about the future they want. This could take the form of an “economic Codesa” . Key players would come together, as they did in the negotiations that ended apartheid – called the Convention for a Democratic South Africa (Codesa) – to try and reach consensus on the economic choices the country needs to make.

Besides the economy, a number of other areas are crying out for serious attention. These include educational reform, the government’s moral crisis, the development of a culture of public service, and electoral reform that enables voters to punish representatives and parties who fail to respect them.