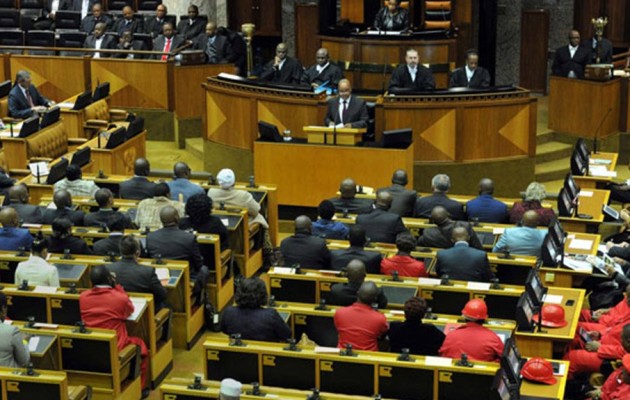 CAPE TOWN,  03.02.2016: Opposition parties and lobby groups are `up in arms´ following the adoption of the Land Expropriation Bill by the parliamentary portfolio committee on public works.

On Tuesday [02.02.2016], six MPs of the African National Congress (ANC) voted in favour of the bill, the Inkatha Freedom Party (IFP) abstained from voting, the Democratic Alliance (DA) and United Democratic Movement (UDM) opposed it, while the Economic Freedom Fighters (EFF) was absent.

The Bill will set the rules under which the state can lay claim to urban and rural property by giving the Minister of Public Works the right to expropriate land  for a public purpose, such as building a road or erecting a power-line, or in the public-interest.

Immediately after the portfolio committee’s session, the DA issued a statement saying the Bill remains at odds with the Constitution when it comes to the definitions of “property” and “expropriation”.

The DA also said the Bill’s implementation could lead to disinvestment in the country, thereby causing job losses and weakening the economy.

“The DA will continue its efforts through further parliamentary mechanisms to ensure that this Bill is not summarily adopted without dealing further with the constitutional obstacles it presents,” DA MP Anchen Dreyer said.

EFF spokesperson Mbuyiseni Ndlozi was not immediately available for comment, but his party has previously stated its opposition to the Bill. The EFF stance is “expropriation without compensation” to white owners.

The Bill will now be debated in the National Assembly and voted upon. If it is passed, public hearings and a vote in the National Council of Provinces follow. Thereafter it will be sent to President Jacob Zuma to sign into law should it be adopted.

Business lobby group AfriBusiness said it would test the constitutionality of the Bill should it be approved by Parliament.

Jansen van Rensburg, CEO of AfriBusiness, on Wednesday said the bill will be catastrophic for the country’s economy.

“It destroys the most important principle of a democratic state, namely the right to own property,” warned Van Rensburg.

Trade union Solidarity also described the adoption of the Expropriation Bill as bringing the South African economy one step closer to junk status.

According to Solidarity Deputy General Secretary Johan Kruger, the adoption of the said legislation by parliament may satisfy ANC-voters in the short term but in the long term it will contribute to leaving the economy in tatters.

“The ANC will now have to decide whether it wants to further paralyze an economy that has already been crippled by this piece of destructive legislation,” Kruger said.