Student-protests give South Africans a glimpse into hidden lives 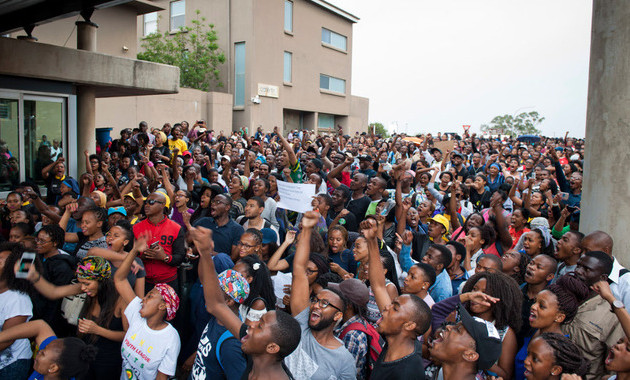 Just as mass protests were beginning at various campuses across South Africa, a fracas broke out among leading advocates at the country’s Bar.

Some of us were lucky to even get to university. Some of us studied by candlelight, because there was no electricity.

The clash between members of an elite and traditionally conservative profession offered a window into the present moment. It highlighted tensions between what renowned political scientist James C. Scott refers to as “public” and “hidden” transcripts.

In Domination and the Arts of Resistance: Hidden Transcripts Scott argues that the public transcript is:  … the self-portrait of dominant elites as they would have themselves seen.
The “hidden transcript”, on the other hand, represents the voices of those who are:  … off-stage, where subordinates gather outside the intimidating gaze of power.

Scott argues that when elites want to control a segment of the population they create a “public transcript”, to explain and justify their use of power in ways which often blame that group for its own oppression.

South Africa’s public transcript has always been that whites are morally and intellectually superior to blacks. All the acts of domination carried out against black people, then, were justified on the basis of this core idea. The source of this narrative can be traced back to Cecil Rhodes whose 1877 confession written at Oxford included the famous words:

`I contend that we are the finest race in the world and that the more of the world we inhabit the better it is for the human race.´

This became an early and – in the words of Yale doctoral candidate Henry Trotter – “publicly circulated” justification for colonialism. Trotter’s assertion is that the statements of early colonial administrators in South Africa served as “a screen behind which the performance of domination took place”.

It was a statue of Rhodes on the University of Cape Town’s campus, incidentally, that sparked the first of 2015’s student protests.

Scott reminds us that the relationship between the public and hidden is dialectical: the “hidden” transcript is a response to the official version of events. It is a running commentary on the foolishness of those in the dominant class. So, when there is “a rupture of the ‘cordon sanitaire’ between the hidden and the public transcript”, the results can be explosive.

It seems that we are living through precisely such a moment.

The myth of meritocracy

The apartheid-era public transcript of racial superiority has been replaced by a post-1994 discourse on merit. As the idea that white people were intellectually and morally superior to blacks fell out of favour 20 years ago, it was substituted for a new public transcript. This insisted that whites were more meritorious than blacks. This is the idea that Spoor drew on in his ill-advised comments.

In some ways it is an archetypal myth – one that can be seen everywhere in daily life. The myth of meritocracy was called upon in countless social media posts by white South African students frustrated that their “hard work” would be jeopardised by the actions of the protesters.

This shallow understanding of merit is the driving force behind the core disagreements between many white and black South Africans about the role and place of affirmative action in society.

In the days that followed the Spoor incident, and as the protests swelled, my social media accounts were inundated by posts from black South Africans in their 30s and 40s – my peers in the “transition”-generation  –  expressing their solidarity with #FeesMustFall by sharing their own accounts of surviving campus life.

There were stories from those whose parents had sold livestock to fund their transport to university and back. There were painful recollections from people who had to wait two, three, five, even seven years for their degrees because they didn’t have the money to pay the registrar to release their results.

Then, as the week ended I blinked my way through the bittersweet words of a student whose family was too poor to travel to his graduation ceremony. After it was all over he stayed seated and alone, not quite sure how he had made it. He was the last person to leave the hall.

There was something cathartic about the stories. They had the quality of long and closely held secrets. Yet they weren’t quite secrets: they were simply the kinds of invisible stories that black South Africans have been sharing with one another for generations. In every family where someone has attended university, the struggle to keep a child in school is well understood.

Among these stories of triumph and difficulty there were many about luck and kindness and the grace of strangers. But for each story told there are countless more we will not hear. Their protagonists never made it to university because of the failure of the country’s basic education system.

South Africans can no longer educate their children on the basis of luck and the goodwill of overstretched students.

The students who have been protesting since April have not yet won the results they are after. Despite this, the mass action has served as a powerful reminder to South Africans that they are capable of far more than they are presently achieving.

Emboldened by the courage of those who took to the streets, older South Africans have also been inspired to tell their stories. We are all beginning to understand that what has been hidden must now be made public.