Thabo Makgabo in Wittenberg: “I have a dream … !” 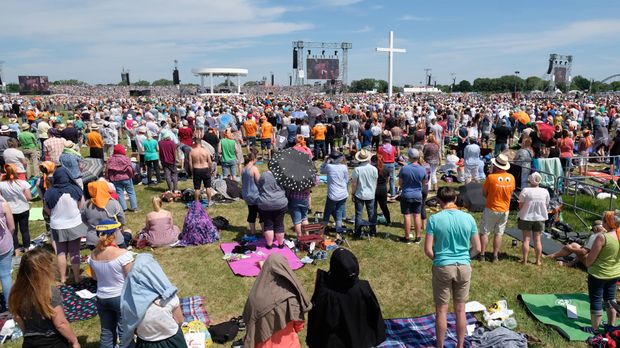 WITTENBERG/Germany, 28 May 2017, 12:00: Archbishop Thabo Makgabo, Cape Town, held the sermon in the open-air service in the `Luther- and Reformation-City of Wittenberg´ attended by hundred-thousands participating at this year’s Kirchentag, the country-wide bi-annual event of protestant and ecumenical activists in Germany that are engaged in social and political initiatives and projects, entitled “You see me” (Genesis 16,13).

Thabo Makgabo concluded his clear and inspiring sermon by sharing a vision he cherishes for Africa and the world: “I have a dream … !”

Thank you all for your warm welcome!

I am honoured to be here on the beautiful Elbe meadows before the gates of Lutherstadt-Wittenberg. It is a great privilege to take part in launching the Reformation Summer and celebrating Kirchentag 2017.

Here in front of me, I see the true spirit of tolerance, amplified by the understanding of the benefits of a multicultural society. Thank you for your witness to the world. Vielen Dank.

Friends, it is impossible to overstate the contribution of Martin Luther to that part of the world influenced by Europe and its thought. His questioning of authority ignited and illuminated a civilization that became the catalyst for millions leaving the Dark Ages. He was one of the true fathers of democratic freedom. He mobilized millions, in an unstoppable movement, to embrace the right to participate. He made it safe to want to be part of something bigger than ourselves.

The Reformation, which he initiated, was more than a theological watershed. It was a defining moment in our sociological and political evolution. But the Reformation is not something which concerns only our past.

Interpreted in today’s context, it can become our guide, our inspirational GPS, our global positioning system for the next 500 years.

The histories of both of our countries – that of Germany in the Nazi-era, and of South Africa in the apartheid-era – are records of unspeakable cruelty. But they are also histories of God’s unfailing faithfulness. They both speak of the challenge to find the Holy One who is, as the hymn says, “standing somewhere in the shadows … and you’ll know Him by the nail prints in His hands.” Our histories are testimony to the power of Hagar’s words when she says: “You see me.”

For any African, Hagar’s story is deeply etched into both our historical DNA and our contemporary experience. Dolores Williams reminds us that Hagar’s predicament involved slavery, poverty, sexual and economic exploitation, surrogacy, rape, domestic violence and homelessness.

Black people generally but particularly black women in South Africa know exactly the same realities. They know that in so many contexts, “black lives do not matter.”

But as we read the Hagar story further, we find that alongside this litany of suffering and exclusion, there is also the story of a God who acts in a powerful way. When Hagar finds herself vulnerable on the periphery, God gives her the resources to survive. Just like the Syrian refugee you have welcomed into Germany, Hagar stands as a beacon of hope to all who suffer, to the oppressed around the world.

Kommentare zu »Thabo Makgabo in Wittenberg: “I have a dream … !”«