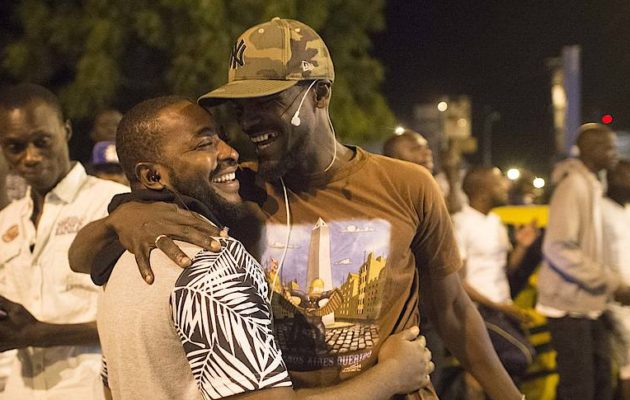 Friends in Banjul rejoicing over the successful efforts in preventing a certainly even more severe crisis. [Picture Alliance]

Measures of constructive Intervention towards resolving Conflicts.
A Lesson from West Africa

Has the Economic Community of West African States (Ecowas) just taught the Southern African Development Community (SADC) a lesson? The West African states effectively took a dictator to task after he had refused to comply with the democratic will of the people to vacate office. Chris Saunders* and Henning Melber* reiterate the issue and open an exchange of perceptions in a wider context focussing especially on Southern Africa: 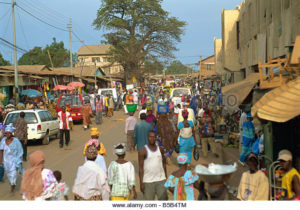 By using diplomacy in combination with the threat of military force, Ecowas managed to convince the former Gambian president Yahya Jammeh to surrender power and leave the country. This was after he was defeated in an election.

Why has the southern African regional body been, in comparison, so ineffectual? Will it learn from Ecowas and become more interventionist?

Many countries in southern Africa have not had free and fair elections; Zimbabwe is the most obvious example.

Where there have been cases of unconstitutional seizures of power, or leaders have stayed in office despite a lack of electoral support, there has been at best some form of SADC mediation, but not the threat of military intervention.

Such contrasting relative tolerance – if not outright passivity – can be explained by a number of factors. They relate in part to the sub-regional configuration, with former liberation movements governing the most influential member states. In addition, there appears to be a lack of common political will. This can be seen from the fact that there is no operational regional military force.

SADC’s credibility is at stake. At a time when the AU is increasingly promoting legitimate governance, the question arises: how much longer can SADC justify its inaction?

The case for a regional military force

The `Anglophone´ member-states of Ecowas formed a military force, called the Ecowas Ceasefire Monitoring Group (ECOMOG), already in 1990. It has intervened in a number of civil wars and cases of instability in West Africa.

SADC, on the other hand, has for years been attempting to organise a stand-by force which would fall under the stand-by force of the African Union (AU).

But the SADC force isn’t operational and has not got beyond some basic training exercises. Units of the South African National Defence Force have been deployed for peace-making missions on behalf of the AU and the United Nations (UN) in a number of African countries. A disastrous military engagement in the Central African Republic cost the lives of 13 South African soldiers in March 2013. South African troops remain in the Democratic Republic of the Congo (DRC), a SADC member state. Soldiers have been killed there, too.

It cannot be said that southern Africa has not experienced the kind of civil wars that West Africa has had in recent decades, and that there has therefore not been the need for such a force in the region.

The war in the DRC has been far larger than those in Liberia and Sierra Leone where the East African regional force intervened. And there have been a number of other cases of instability where a SADC force might well have played a role in bringing about legitimate governance, including Madagascar and Zimbabwe.

The only case that somewhat resembled events around The Gambia was South Africa’s intervention in Lesotho in September 1998. Nominally under SADC, that intervention’s goal was to ensure the incumbent ruler was not ousted by opposition forces.

Three SADC member states did intervene militarily in the DRC in August 1998. Troops from Angola, Namibia and Zimbabwe were deployed, nominally under the umbrella of SADC. The goal was to aid the then president, Laurent Desiré Kabila, against rebels who had invaded the eastern Congo. Kabila would not have been able to consolidate himself in power without the military support of the three SADC states.

Both interventions were controversial within SADC, since they were not based on a common decision by the member states. These were at that time marred by the rivalry between Zimbabwe’s Robert Mugabe and South Africa’s Nelson Mandela. This may help explain why there have not been any similar military interventions since.

Zimbabwe stands out as a case for intervention. Back in March 2002 Mugabe’s re-election as president was rigged and did not reflect the democratic will of the people.

Then in March 2008 he lost presidential elections to his rival Morgan Tsvangirai. By all accounts Tsvangirai won the election, but Mugabe rigged the vote. A second round of voting was deemed necessary. But the ruling party’s militia unleashed brutal state terror against the opposition and Tsvangirai pulled out of a second round to stop further loss of lives.

Instead of taking action against Mugabe, SADC engaged in mediation. This led to a coalition government being formed.

Why did Ecowas act firmly against Jammeh while SADC didn’t against Mugabe? There are a number of reasons.

Zimbabwe is a much more important country in southern Africa than The Gambia is in West Africa. Despite all his human rights abuses and repressive rule, Mugabe remains a widely-respected liberation hero and popular among large parts of the population in the sub-region and on the continent. He has been able to project himself as having not only liberated his country from colonialism but also as remaining steadfast against colonial influences. Above all, he managed to sell his fast track land reforms as a necessary and just act of appropriating land from white farmers and giving it to blacks.

Another key factor is that the most influential SADC countries are led by liberation-era leaders who continue to regard Mugabe as one of their own.

Taking action against Mugabe would therefore always be controversial, and the consequences difficult to predict. In addition, Zimbabwe’s army has remained loyal to Mugabe and is a force to be reckoned with. The SADC leadership therefore played safe and did nothing effective.

Unfortunately, there seems little chance of SADC following ECOWAS’s example and using the kind of intervention that led to Jammeh’s removal from office.

SADC faces just such a test in the DRC. President Joseph Kabila has finally agreed to leave office. This should happen latest a year after he should have stepped down when his two terms came to an end. He made his decision after public protests against his continued term in office turned violent in December. Many people were killed during two days of riots.

If Kabila reneges on the agreement he has made, will SADC act to ensure he in fact leaves office? How long will it take before SADC has the means and the will to remove rulers who have either been defeated in an election or who refuse to accept that their terms of office have come to an end? Will what has happened in West Africa in the case of The Gambia help persuade SADC to move towards more effective interventions to remove dictators and other illegitimate rulers?