Henning Melber: In the shadow of genocide – German colonial amnesia 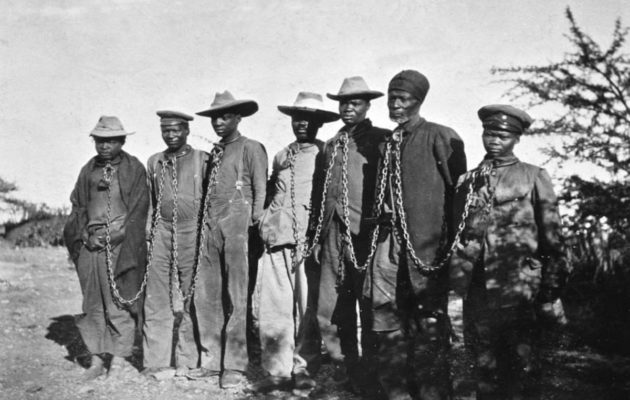 Herero prisoners stand in chains during the 1904 genocide. Wikimedia Commons.

Professor Henning Melber* explores the German version of colonial amnesia, which he says is not about a lack of historical research, but a failure to acknowledge – emotionally and politically – what is known.

The German colonial empire was officially established in 1884 – shortly before the Berlin Africa Conference, hosted by Chancellor Bismarck, formalised the deals among European competitors. World War One and the Treaty of Versailles ended German foreign direct rule over overseas territories.

Nowadays, the era is at best considered as an episode. If at all, it is only mentioned in passing in school textbooks. But at the beginning of the 20th century Germany was the fourth biggest colonial power and left lasting scars. The warfare against the Ovaherero and Nama in its settler colony German South West Africa between 1904 and 1908 escalated into the century’s first genocide.

Hundreds of thousands of Africans starved to death in then German East Africa as a result of a policy of scorched earth. The ruthless forms of subjugation and annihilation paved the way for a mindset and practices culminating in the Holocaust. But while the colonial chapter lasted more than double the time of the Nazi-regime and left a murderous trail, no official discourse has yet formally revisited this past rigorously.

It took 110 years until in 2015, the German government reluctantly recognised the genocide that happened in today’s Namibia. Since then bilateral German-Namibian negotiations seek to come to terms with this shared history and its lasting consequences. The focus is on an apology and compensation for the crimes committed. This brought – not least thanks to a growing civil society movement manifesting in local postcolonial initiatives – a colonial past and its continued traces in German daily life more to the fore. But there remain puzzling blind spots in remembrance.

In mid-2019 the Foreign Ministry published a position paper on transitional justice, advocating “a comprehensive understanding of confronting past injustices”. It refers to “reparations and compensation for National Socialist injustices” and suggests, “Germany can provide information about basic requirements, problems and mechanisms for the development of state and civil-society reparation efforts.” Strikingly, the term colonialism does not appear in the 32-page document.

The growing awareness generated by a proactive civil society contrasts with renewed denialism and colonial-apologetic campaigns by the populist right. While postcolonial initiatives have gained ground, including the debate over restitution of stolen cultural artefacts, dismissive counter tendencies feed into what could be dubbed colonial amnesia as a widespread feature.

In December 2019, the right-wing Alternative für Deutschland (AfD) held a public lecture on “The Case for German Colonialism” in its chamber in the German Parliament. It had the programmatic (sub-)title: “Why the Germans have not to apologise and definitely not to pay for the colonial era!” Ironically, the speaker was not a “patriotic” German, but none less than Bruce Gilley, a professor at Portland State University, who managed to obtain dubious fame with an article in 2017, in which he eponymously argued The case for colonialism.

Celebrated by the AfD in its announcement as spearheading academic freedom, he ends his presentation with the conclusion: “German memory and writing on colonialism continues to suffer from a post-1918 ideological indoctrination campaign redolent of the worse aspects of totalitarianism. Having variously allied itself with totalitarian movements of the left (Soviets) and right (Nazis), this scholarly industry continues to get a free pass and to be accepted as truthful and just. It is neither. Germany’s reassertion of its classical liberal and Western identity must begin with a rejection of the dogmatic and totalitarian ideology of anti-colonialism.”

An AfD draft resolution, submitted to parliament the same day, called on the federal Government to emphasise the gainful sides of the German colonial era; to work towards a differentiated view of the time; to promote such perspectives in the curricula for schools; to decisively oppose demands for reparations; to rebuke demands for the restitution of cultural goods from a colonial context; and to maintain street names which have been brought up for renaming. It attacks “cultural Marxist inspired post- and de-colonialism”, accusing the “left spectre” of imposing its “normative interpretation of the past”. Demands for restitution of cultural artefacts are disqualified as inquisition aimed at the “removal of inalienable property”.

In a parliamentary session on 1 July 2020, this draft was dismissed by all other parties. Draft resolutions by the Liberal Party, the Green Party and The Left were also rejected by a majority of votes. All had proposed in different ways provenience research on cultural artefacts as a need for restitution. Furthermore, Germany’s colonial past should play a more prominent role in school curricula. The governing Social Democrats and Christian Democrats argued that state agencies have already increased these commitments. The Greens and the Left had also asked for the establishment of a national memorial site for the victims of German colonialism in Berlin. In addition, the Left called for a Foundation to address colonial injustices jointly with descendants of the victim communities.

While such steps to address the German colonial past remain on the agenda, massive deficits in official policy continue. This corresponds with a public discourse, in which denialism and colonial revisionism in combination with everyday racism again gain ground. Being widely recognised for an active remembrance of the Holocaust, Germany still fails to live up to signs of a similar willingness to address its colonial past. Such inability if not blockage justifies the diagnosis of colonial amnesia.

*Professor Henning Melber is a senior research fellow at the Institute of Commonwealth Studies, School of Advanced Study, University of London. He is also senior research associate at the Nordic Africa Institute in Uppsala, Extraordinary Professor at the University of Pretoria and the University of the Free State in Bloemfontein, and president of the European Association of Development Research and Training Institutes. His recent publications include (as co-author, with Reinhart Kössler) Völkermord – und was dann? Die Politik deutsch-namibischer Vergangenheitsbearbeitung, and (as editor and contributor) Deutschland und Afrika – Anatomie eines komplexen Verhältnisses.