Own Initiative to prosecute international Crimes 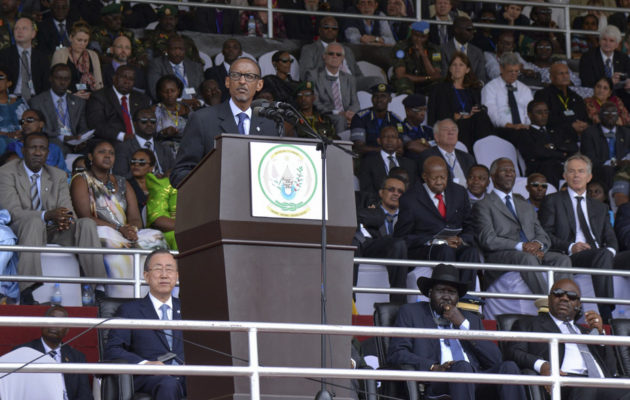 The Rwandan president, Paul Kagame, at a commemoration of the 1994 genocide. EPA

The Rwandan government announced recently that up to 20 French officials could face trial for responsibility in the Rwandan genocide of 1994. The move raises many political and diplomatic questions, and gives new life to the Rwandan government’s longstanding allegations that the French state was complicit in the genocide. Chandra Lekha Sriram* reports:

But beyond all the intrigues which will no doubt ensue, this could be a huge step for international criminal justice. More than just another variation on the theme of “African solutions to African problems”, it could set a precedent for finding African ways of prosecuting international crimes.

Other, similar manoeuvres are underway too. Rwanda and the Aegis Trust, a UK-based genocide prevention NGO, have also requested that five Rwandans be extradited from the UK to Rwanda. This would also offer the reverse of the usual trend of prosecutions in Europe, which usually sees European states imploring African ones to extradite potential defendants for prosecution. The UK courts have yet to render a decision on this request.

Several African states have complained that the ICC has become an “International Criminal Court for Africa”, since until recently, its caseload was comprised entirely of cases and situations from the continent. They have further claimed that it is a neocolonial institution, and in 2016, Burundi, South Africa and The Gambia all announced they would withdraw from the statute of the court.

The ICC’s first prosecutor and its current staff consistently reiterate how important it is to develop a system of international criminal justice, noting the limited capacities of (and political objections to) the ICC. Several events suggest that African states are spearheading such alternatives, finding ways do address the impression that international justice is an imposition from the rest of the world and to challenge the impunity of leaders and former leaders who have too long gone untried.

Chad’s Hissène Habré, for instance, lived in Senegal for some 20 years to evade justice for crimes committed while he was president in 1982-1990, during which time some 40,000 people were killed. Belgium sought his extradition and won support from the International Court of Justice, which found that if Senegal was not prepared to try him, it should extradite him to Belgium for trial. But after negotiations, a special tribunal was created in Senegal to try him, and in May 2016, he was convicted of crimes against humanity.

Just as challenges to the ICC began to crop up across the African continent, the African Union in 2009 approved an agreement to create a new criminal chamber in the African Court of Human and Peoples Rights. It is still under development, and should it become operational, it would offer a local option in a widened system of international criminal justice.

The problem is that while many states have officially accepted the court’s jurisdiction, relatively few states have have actually ratified it. Given that they are already ambivalent about its very existence, they will surely be unenthusiastic about its being given criminal jurisdiction.

Another approach is to create domestic tribunals or chambers to address international crimes, in part as a form of resistance to the ICC and the global north’s supposed monopoly. Uganda, which originally referred the situation in the north of the country to the ICC, has become a vocal critic of the court. It created an International Crimes Division of its high court in 2008, but it has yet to engage in significant prosecutions, partly because of problems with domestic amnesty legislation.

When Lord’s Resistance Army commander and former child soldier Dominic Ongwen was captured in 2015, the government first announced that he would be tried domestically, but then turned him over to the ICC, where he is currently standing trial.

In 2015, the Central African Republic established a special criminal chamber to investigate and prosecute people responsible for war crimes. And while it is still too early to assess how well the chamber is functioning, but unlike Uganda, the Central African Republic hasn’t been a vocal critic of the ICC and has in fact previously referred its own situation to the court.

Like many of these initiatives, Rwanda’s push to prosecute French officials needs to be viewed with healthy scepticism. After all, many of the devices described above have been in significant part designed to avoid the jurisdiction of the ICC or foreign courts, and some governments have used them to target political opponents.

But so long as the ICC faces a crisis of legitimacy, the rule of international law is under serious pressure. Its demise may not be imminent, but local solutions may provide important alternatives.

*Chandra Lekha Sriram , Professor of International Law and Director of the Centre on Human Rights in Conflict, University of East London, South Africa.
Source: THE CONVERSATION, 18.01.2017