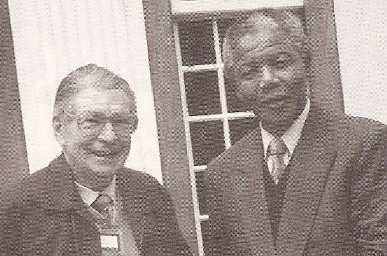 Oom Bey and Madiba in Groote-Schuur in May 1990

10 May 1995: People all over were celebrating the first year since the first president of democratic South Africa, Nelson Mandela, had been sworn into office.  On the same day many were celebrating and congratulating someone they loved and respected for his stand for justice and reconciliation, Christiaan Frederick Beyers Naudé – fondly called “Oom Bey” – who was turning eighty years of age. [On 10 May 2015 Oom Bey would be turning a hundred years of age].

The journal “Challenge” published in June 1995 an interview with Oom Bey that revives memories and motivates in a significant way – twenty years hence:

Acclaimed internationally for his courageous stand against apartheid in the name of the gospel of Jesus Christ, Dr Beyers “Oom Bey” Naudé turned eighty on May 10 [1995] – the first anniversary of the installation of our new president.

Between all the birthday-celebrations ALBERT NOLAN was able to speak to one of South Africa’s best known Christians. MZI OLIPHANT took the pictures.

So much has been said and written about this man, especially during the last month or so when he was acclaimed in the media and in numerous speeches because of his eightieth birthday. Is there anything left to be said about him? This was the question in my mind as I arrived at his small Braamfontein office to interview him for Challenge.

As always he surprised me with a wealth of information and new insights. You must remember that at the basis of it all, he began, is Christian faith and God’s grace. “I was simply trying to be obedient to the gospel of Jesus Christ. Nothing else. It was and still is my privilege to be a Christian during this important stage in our history.”

Dr Beyers Naudé had not always been opposed to apartheid. I asked him what made him change. “There was no sudden Damascus-conversion.” he says. It happened slowly and at different levels.

“First at an intellectual level during the late 50’s I began to discover that the Dutch Reformed Church’s justification for apartheid was false. Nowhere in the Bible was there any justification for this policy.”

At the level of practical experience Oom Bey speaks about being shattered by a visit to the “compounds” at Crown Mines. He had never seen human beings cramped together in such inhuman conditions. Ministers [= pastors] from the Dutch Reformed so-called “daughter”-Churches had taken the young white minister [= pastor] there to show him what apartheid meant in practice.

But the last straw for the young Beyers Naudé was the Sharpeville-massacre in 1960. After that, he says, he could remain silent no longer. His Christian faith compelled him to speak out and to take action.

For the next thirty years and more Beyers would find himself not only in conflict with the government but also and more painfully with his Church.

In 1960 he was the Acting Moderator of the Southern Transvaal Synod of the Dutch Reformed Church and it was in this capacity that he went to the famous Cottesloe Consultation – a consultation between the World Council of Churches and its South African member-churches at which a number of anti-apartheid resolutions were taken.

When I asked Oom Bey how he felt today about Cottesloe, his answer surprised me. “It was a great blessing because it introduced me to the ecumenical church. And what a wonderful enrichment to my faith and my life that proved to be.”

To further the struggle against apartheid and to promote ecumenical cooperation between Christians, Beyers and others founded the Christian Institute. He was appointed its first director and soon became one of the most famous personalities in the ecumenical movement worldwide. In the meantime his own Church refused to allow him to continue as a minister [= pastor].

Beyers remained an ordinary member of the white DRC until 1980. The last straw for this man of justice was the DRC General Synod’s rejection by an overwhelming majority of their so-called “daughter”-Churches’ request for re-unification. “That decision was taken,” he says, “purely on the basis of colour. I resigned as a member of the [white] Church and joined the DRC-in-Africa.”

On October 19 1977 the Christian Institute and Beyers himself were banned – along with numerous black organisations and black leaders. He could not speak in public or attend meetings, he could not enter any black township, he could not leave the municipal area of Johannesburg and he was not allowed to speak to more than one person at a time. I asked Oom Bey what his banning meant to him as a Christian.

“I learnt many things,” he says. “I had to struggle not to become bitter. Paul’s instruction not to let the sun go down on our anger (Ephesians 4:26) was a constant challenge to me. More than anything else I came to appreciate Jesus’ prayer on the cross: `Father, forgive them, for they know not what they do´.

“Having been more or less silenced myself, I learned to listen to others. What a powerful blessing that proved to be especially in later years when I became the General Secretary of the South African Council of Churches. Even though I could see only one person at a time, I saw very many people. I listened for hours to each one’s problems and each one’s pain. I discovered what it meant to be a victim of apartheid.

“You could say then that my banning was a blessing in disguise. Without that experience I would have made many mistakes in later life and I would have found it very difficult to understand the anger of the victims of oppression.”

ON THE NEW SOUTH AFRICA

“If someone had told me that all these changes were going to take place in my lifetime and before the end of the millennium, I would have told them that they did not know what they were talking about. I am overwhelmed by what has happened – the new government and the new attitude of the DRC.”

On May 10 last year he celebrated his 79th birthday as an honoured guest at the inauguration of South Africa’s first democratically elected president.  He says that he could not have been given a more exciting birthday-present.

In October of the same year the DRC formally apologised to Beyers and others who had “offered a clear and prophetic witness against apartheid”.

The new moderator, Rev Freek Swanepoel, welcomed Oom Bey and his wife Ilse to the October Synod with the words: “We recognise your witness, brought to us for many years from outside the walls of the Dutch Reformed Church. There were times when you were wronged by the Church, and we have to express our regret.”

Prof Piet Meiring was more direct: “We are sorry. We should have listened to your warnings!”

“This brings a long struggle to full circle.” proclaimed Oom Bey in his response to a standing ovation by the Synod. “I am very thankful that I lived to see it.” And Ilse added, “I have been waiting for this day for thirty years”.

Today [June 1995] sitting in his office recalling these events, Oom Bey is quick to point out that the churches, all the churches, are now faced with even greater challenges than before.

“The church of the future will have to be an ecumenical church. Trying to live in isolation as a separate denomination has no future in South Africa. Unless we give our full attention as Christians to the need for a form of reconciliation which is based upon justice,” he warns, “our witness will become largely irrelevant.”

And then there is the issue of solidarity with the poor. Like many others Beyers Naudé believes that the church must now face the massive problem of economic injustice – the gap between the rich and the poor and the climate of corruption that has become an accepted way of life.

The churches in South Africa have been an unprecedented opportunity to become more truly the church of Jesus Christ. To be part of that process is, according to Beyers, a wonderful privilege.

“After all this I will have to take up the Catholic practice of fasting,” he says teasingly.  There have been so many dinners and parties. Friends and relatives here and in Europe have been celebrating his eightieth birthday with him and Ilse for months.

“What I have gained through all these experiences over the years are friends, thousands of friends throughout the world. I am rich in friends. Their moral support, love and warmth has been a spiritual enrichment that I would not exchange for anything else in the world. And now even those who once treated me as an enemy are stretching out the hand of friendship.

“The birthday celebrations are another indication that God continues to give back to me a hundred times over anything I might have lost in earlier times.”

Leaving his office that day, I felt more convinced than ever that here we have a true [African], a true South African, a true comrade, but above all a true Christian. – Albert Nolan.