THE SHARPEVILLE COMMEMORATION: A View and Concerns from Khulumani Sharpeville Committee 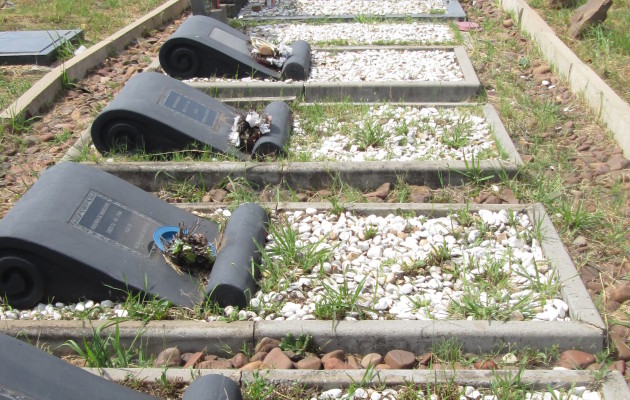 In the community in Sharpeville there is apparently deep unhappiness about the state of the graves of the 69 victims of the shooting of 21 March 1960. Initiatives are underway to consult and negotiate for solutions – hopefully in time for this year’s Commemorations, 55th anniversary.  Marjorie Jobson, National Director, Khulumani Support Group reports on the progress and the problems still demanding attention. Dr Jobson hopes for support and co-operation beyond the circle of those already involved in that community:

“On Thursday, 19 February 2015, David Ramos, Freedom Ngubonde and Frans Mogajana accompanied me to meet with the Sharpeville Khulumani Committee all day because of their concerns about this coming National Human Rights Day, 21 March, the day of the Sharpeville Massacre. I am writing this report from my notes of the meeting from Thursday and from the minutes that I was given of the meeting attended by Khulumani, SAHRA (South African Heritage Resources Agency) and an official from Sedibeng Municipality.

“The background to the request for a meeting was the following:

“In January 2015, the Khulumani Committee set up a meeting with the relevant officials in the Sedibeng Municipality – the officials responsible for heritage work in the municipality. The reason they called the municipality’s heritage department was because there is apparently deep unhappiness in the Sharpeville community about the state of the graves of the 69 victims of the shooting of 21 March 1960. The community says that they think Khulumani should take responsibility for maintaining these graves. The official from the municipality came to meet the Khulumani Committee on 15 January 2014. Sedibeng Municipality referred Khulumani to SAHRA and suggested that the National Khulumani office should be pressurising SAHRA to take this forward.

“SAHRA (the South African Heritage Resources Agency), the national state-funded heritage agency for the whole country, is responsible for the care and maintenance of so-called “war graves”. The Khulumani Sharpeville Committee explained that the graves are not being maintained, except for the role played by Khulumani each year early when in March before the national event, they go to the graveyard (called Phelindaba Cemetery) to clear the weeds growing on the graves and to either paint the head stones with black paint or to use black shoe polish that they buy to apply to the headstones to make the headstone look cared for before the national event on 21 March 2015. The date for Khulumani’s cleaning of the graves for this year is 18 March 2015.

“Following the January meeting with the Sedibeng Municipality Heritage Department, SAHRA sent their responsible official, Mr Ngqabutho Madida, to meet the Khulumani Committee on 13 February 2015. Mr Madida said that there was no budget available to “fix” the graves and that any agreed allocation would have to go into the budget for the coming financial year (1 April to 30 March 2016).

“The Khulumani Committee told the official that they have been asking SAHRA for help for the past 5 years. They explained that the very first visit by SAHRA to review the state of the graves and the damage to the tombstones took place in 2014. From that time, there had been no further contact until this visit.

“Mrs Phetane, Khulumani Sharpeville Chairperson explained to Mr Madida that “in the run-up to National Human Rights Day 2014, they (members of the Khulumani Committee) were threatened with violence and they could not sleep at home for 7 nights. The windows of the homes of Khulumani Committee members were smashed by angry Sharpeville residents” who blamed Khulumani for the lack of care of the graves. They explained that similar threats against the Khulumani Committee have started again because the tombstones have still not been fixed. Community members threaten that they will not allow the ceremony to take place if the graves are not fixed.

“The understanding is that the graves must be fixed by SAHRA who are tasked with this responsibility. The Khulumani Committee explained to us in the meeting on Thursday that in 2003 SAHRA had allocated a budget to fix the graves and a contractor had been appointed who had supplied materials and 9 workers to work on the graves.

“When our meeting concluded, we were taken by Mrs Phetane to visit the graveyard to see the graves first-hand.

“The scrolls on the majority of the graves are hollow inside and have an elaborate scroll on each side. On the top there is a small plaque carrying the name, age and dates of birth and death of each victim.

“It seems that the ferrocrete does not have a long lifespan unlike a granite tombstone and it weathers quite badly – it cracks and the concrete peels off from the underlying fabric.

“When we visited on Thursday afternoon, to Mrs Phetane’s surprise the headstones appear to have been polished again with shoe polish although Khulumani had not done this. They think that someone had been sent to do this because the Khulumani Committee had alerted the Sedibeng Municipality that the graves were not looking good. So while the headstones do not look ‘bad’ presently, there are quite a lot of weeds growing over the rest of the grave. The cleaning of the weeds will be done by Khulumani on 18 March as explained above. Once again this in their view is a short-term solution.

“It seems to me that the fact that SAHRA did not provide granite headstones for all the graves is the cause of distress to the community of Sharpeville – that the state seems to have taken short-cuts and has not invested in providing real headstones made of granite for the graves of these ‘martyrs’. These feelings are, I believe, understandable.

“As the massacre that happened at Sharpeville in 1960 happened in response to a call from PAC President Mr Robert Sobukwe that had broken away from the ANC it is thought that the lack of attention to the graves may be a symptom of the ANC’s discrimination against anyone who is not considered ANC. Hopefully this is / will change.

“It is clear that it is not be possible to get a budget committed from SAHRA at this stage. What measures can be undertaken in the meantime?

“We need first to engage with SAHRA and find out why they did the limited job they did? What was budgeted for the project? Did the contractor fulfil the tender?

“We also we need to call together all the family members of the victims of the Sharpeville Massacre so that we can find out how they feel about the situation, how they feel about how the massacre is remembered today, what they would like to see, and what kinds of graves / headstones they would they like to see installed. I think this would be the only way to find out from them what would satisfy them. Most families of the victims still live in or near Sharpeville. It would be helpful to produce a booklet that talks about how their lives are today and how the massacre affected them.

“With respect to the monument – the Sharpeville Human Rights Precint where there is a small museum – I was told that a new management committee has been installed and there is no representation of the families of the victims of the massacre on the committee. The Khulumani Committee has apparently been excluded from the Museum at the Human Rights Precinct. The Committee reported that “there is no history at the museum. We gave the museum artefacts like the bloodied shoes of our loved ones who had been killed, but we don’t know what they have done with these shoes. We have photos to put in the museum but nothing has developed. We want to set up a Friends of the Monument group that can be involved in storytelling when there are visitors to the museum.”