Short film: “into Us and Ours” 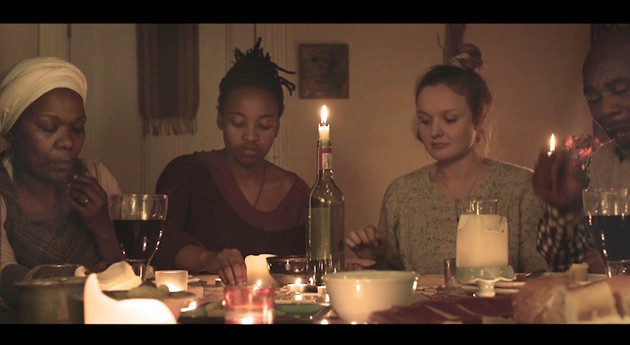 “a story of love and misunderstanding”,

`into Us and Ours´, a short film by third-year UCT film-student Jessie Zinn showed at Cannes Film Festival Short Film Corner after making waves on the international film-festival circuit.

“We have been invited to two more festivals in France and Belgium later this year,” said Jessie.

Described as “a story of love and misunderstanding”, the film documents the experiences of two born-free South Africans and their reactions to an incident through the lens of `race´, class and sexuality. The film grapples with how the new South Africa, the “rainbow nation”, has been built on a tenuous foundation that affects young South Africans on a daily basis.

Into Us and Ours features professional actors Faniswa Yisa and Nhlanhla Mkhwanazi along with UCT drama students Qondiswa James and Emilie Badenhorst. The film was produced by Katherine Werge, directed by Junaid Rawoot, edited by Chase Musslewhite, with production design by Alex Grieve and sound and lighting by Declan Khan.

Into Us and Ours was Jessie’s graduation film, which was completed as part of her BA in film-production. Her mentor was award-winning film-maker Jenna Bass.

“It is a simple story – a drama between two young born frees as they begin to question the fundamentals of their connection after an idyllic day takes a hit into the unknown,” said Jessie.

In an article on the Centre for Film and Media Studies website, Jessie said that she regards the sociopolitical issues as the most important aspects of the piece.

“I believe that cinema has the power to create societal change and help foster meaningful dialogue. We are living in a country that has been experiencing important dialogue surrounding education change, institutional racism and interpersonal dialogue between born-frees. This is what our film is about. So, of course I am thrilled with our international achievements, but I am also excited about the dialogue and conversations that our film inspires locally when we screen it to audiences here in South Africa.”

She describes the 13-minute film as “complex and nuanced”.

“[It’s] layered with images which tap very much into the rage, despair, frustration and confusion of the so called born-free generation: many of whom don’t feel free at all. It tracks one day in the life of two young women. An incident shatters their relationship. The postmortem of the event occurs in the one woman’s family home during load-shedding and that heightens the tension.”

Although Jessie conceived the story, the script was workshopped with the cast and production team.