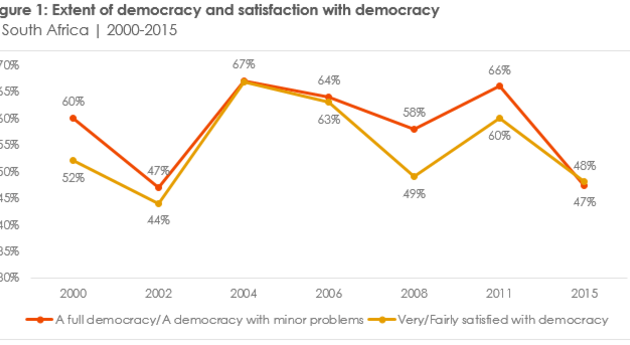 South Africa’s peaceful transition to democracy is widely admired on the continent and around the world. This year, the country marks the 22nd anniversary of this transition. Boniface Dulani* in his article entitled “South Africans are demanding more of their leaders, and democracy” gives a comprehensive account:

CAPE TOWN, 17.02.2016: President Jacob Zuma began his recent State of the Nation Address by expressing pride in the achievements made to date, remarking that: Our democracy is functional, solid and stable.

But a survey by Afrobarometer shows that growing dissatisfaction with the country’s leadership and government performance has spilled over into frustration with democracy in general. Afrobarometer is a non-partisan research network that conducts public attitude surveys across the continent.

Looked at cumulatively since Afrobarometer’s first surveys in 2000, the most recent results suggest that South Africans are becoming increasingly demanding of the country’s democracy. What was good enough at the dawn of democracy is no longer adequate.

Rising dissatisfaction with the performance of elected leaders, both the governing party, the African National Congress [ANC], and opposition, indicates that they are no longer exempt from the court of public opinion and urgently need to raise standards to regain public trust.

Faith in the system is slipping

Most South Africans who took part in the survey are clear on one thing – they disapprove of various alternatives to democracy. But the proportion who say that they prefer democracy declined from 72% in 2011 to 64% in 2015. This is slightly below the average (67%) across the continent and significantly lower than in other well-regarded democracies in the region. Countries in this category include Botswana, Mauritius and Namibia.

Even more concerning is the fact that less than half believe that the country is a “full democracy” or one with only “minor problems” (47%). Only 48% are satisfied with the way democracy works in the country.

Further analysis by demographic variables shows that race continues to be the leading source of difference in South Africans’ opinions. Generally, black citizens are less critical of democracy than those from minority race groups, particularly white South Africans.

Only half (49%) of white citizens prefer democracy, while even fewer believe that the country is a democracy and are satisfied with its current implementation. Both stand at 28%. Furthermore, only a minority (44%) say that they would disapprove of returning to apartheid rule. Nearly a third (30%) would approve of such an initiative and 23% were ambivalent.

In fact, surprising proportions of Indian (22%), Coloured (12%), and black (10%) South Africans approve of returning to apartheid. This, despite the loss of freedoms that would entail for them.

Findings on immigration point to further challenges in promoting social cohesion in the country. There has been little change since 2011 in levels of intolerance toward foreign nationals.

Attitudes toward immigrants from neighbouring countries makes South Africa one of the most intolerant countries surveyed. Views towards highly skilled workers and foreign investment are somewhat more welcoming.

Close to one in three South Africans (32%) say they would “dislike” or “strongly dislike” living near immigrants or foreign workers, compared to 28% who would like to do so and 40% who would not care. The proportion of citizens who would dislike having a foreigner as a neighbour is surpassed only by Lesotho (42%), Zambia (34%), Mauritius (34%), Morocco (33%) and Madagascar (33%). In general, intolerance is lowest among West African countries.

The proportion of citizens who say the government is doing “badly” or “very badly” in this area has increased. This is despite the fact that tighter immigration regulations were introduced in 2014 to “better manage immigration in a way that balances South Africa’s openness to travellers as well as developmental and security imperatives.”

Since 2004 a majority of those surveyed have said they would be willing to give up regular elections in exchange for guaranteed security and basic services. This is possibly linked to the long-standing weakness in government’s ability to provide basic services.

Furthermore, the survey indicates that workers no longer consider the governing tripartite alliance to be an adequate representative of their needs. Over 50% would support the creation of a new workers’ party.

Since South Africans increasingly believe that it is up to voters to hold their leaders accountable, the successes of last year’s student protests may inspire more citizens to turn to direct civic action to achieve their objectives.

* Boniface Dulani, Senior Lecturer at the University of Malawi, Lecturer in Political Science and Research Associate, Centre for Social Science Research, University of Cape Town. [This article was co-authored with Rorisang Lekalake, Afrobarometer assistant project manager for Southern Africa, based at the Institute for Justice and Reconciliation (IJR) in Cape Town]. Source: THE CONVERSATION