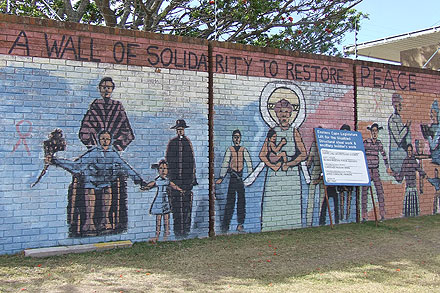 [The historian, Peter Walshe, highlights some aspects of the person and the personality David Russell in his book published in 1983, “Church versus State in South Africa. The Case of the Christian Institute”]

… a 600-mile pilgrimage or walk to publicise the evils of migratory labour (a pilgrimage for which the Covenant Liturgy was written), and the personal witness of a courageous and prophetic member of the Christian Institute of Southern Africa (CI), the Rev. David Russell.

The ‘Pilgrimage of Confession for the Healing of Family Life’ started in Grahamstown on the Day of the Covenant, 16 December 1972, with eight white members of the Institut setting out for Cape Town.[1]  This method of raising white consciousness had been readily accepted by church-hierarchies – perhaps to assuage their embarrassment at the lack of action in the wake of the WWC-challenge. The approach, it was argued, was one that whites could not easily smear as ‘political’. The hope was that the pilgrimage would raise so basic an issue that the hearts and consciences of whites, if they were ever to respond, would do so on this matter of family-life.

… Whites, it was argued, had betrayed their stewardship in using their power to establish a system of labour-control which was ‘tearing husband and wife apart’ and devastating the lives of ‘countless thousands of voteless victims’. Claiming to act in the ‘name of Christian faith’, white Christians had identified with white power or become accomplices through ‘the sin of omission’, in effect trying to wash their hands of responsibility. Migratory labour was ‘a cancer in the life of the nation’, and white Christians should undertake ‘effective and sacrificial action’ to eradicate it. If they were not to be accused of the most ‘hollow hypocrisy’, whites would have to press parliament ‘to make it legal for every South African husband and wife who wish to do so to live together with their children in a family-home.’[2]

After weeks of hiking, stopping for liturgies and Bible-readings, impromptu roadside-discussions, press-conferences and town-meetings along the way, the small group was joined by a crowd of several hundred as it approached Cape Town. Beyers Naudé and Archbishop Denis Hurley were among those who joined the march as it headed for a final demonstration on Rondebosch Common. There a substantial if somewhat disappointing crowd of approximately 4,000 adopted the ‘Charter for Family Life’ and listened to speeches by Naudé, Hurley and a footsore Francis Wilson – pilgrim and economist from the University of Cape Town. [130-131]

… This forlorn if prophetic struggle to move white opinion and so to shift government-policy on one of the most basic of Christian commitments – maintaining family-life – was symbolized, above all else, by the determined resistance of David Russell. The Pilgrimage had been only one of his efforts in a prolonged series of public protest. The son of an advertising executive and United Party MP who had broken away in 1959 to from the Progressive Party, Russell attended the prestigious Anglican high school, Bishops. He went on to Cape Town University and read history at Oxford before entering Mirfield Seminary in Yorkshire. Deeply influenced by Mahatma Gandhi and Charles de Foucauld, he returned to South Africa where he soon took direct action against the injustices of apartheid.[3]

In 1969, as the white assistant-priest of an African pastor in the Transkei near Kingwilliamstown, Russell began ministering to the African ‘resettlement area` of Dimbaza, one of the dumping grounds for dependents and redundant labour ‘endorsed out’ of the urban areas. Working with the destitute and burying the community’s children, he asked repeatedly for official assistance. Receiving none, he moved to confront the authorities. Living in utter simplicity, a person of humility, dogged courage, few words and constant service, Russell was widely respected by blacks and an inspiration to his fellow-members of the Christian Institute. Because of his commitments to a church and a world ‘turned upside down’, to black leadership and a genuinely indigenized Christianity, he was able to remain on good terms with his friends in the black-consciousness movement. This was particularly true of Steve Biko and Barney Pityana, both of whom played key roles in the formation of SASO [South African Students’ Organisation] and establishing the value-commitments of black-consciousness and black theology. In Russell’s understanding ‘the Church was duty-bound to be a disturbing presence’, whether it be in ‘Thessalonica or Pretoria, London or Lusikisiki’. Indigenisation certainly did not mean conforming to a given social structure or passively accepting an established tradition, whether black or white. The church could only become more indigenized by

identifying with and becoming naturally part of – rooted in – the plural society of Southern Africa. [ … ] The Church must now throw in its lot with the needy, the underprivileged, the insulted; it must be poor with the poor, but not in any patronising or romantic way. It must seek for every man what is due to him as a man; struggle for the freedom of all men in all the senses of that word, and be prepared to die in the struggle.

Whites, Russell argued, were just as much in need of freedom as blacks: ‘freedom from their prejudice, and from a great deal of their wealth’.[4]

Dimbaza, with a population approaching 10,000 had negligible employment-opportunities in the surrounding white areas. Those few women who found work, received R5 to R7 per month; the few able-bodied men lucky enough to find casual labour tried to maintain their families on R20 per month. Pensioners received R5 per month. After serving this community for two years and burying thirty-eight children in the first two months of 1971, Russell wrote to M.C. Botha, Minister of Bantu Administration and Development, requesting a personal meeting to explain the situation. While he drew attention to the overall poverty and demeaning unemployment, the specific issue he raised was that of widows who were being dumped in the rural areas and denied the monthly R2.50 per capita maintenance-grants for which they would have been eligible in the cities.[5]

Because Botha was not prepared to see him, Russell traveled to the steps of St. George’s Cathedral close by Parliament in Cape Town. There he began a ninety-hour vigil and fast surrounded by his posters: ‘Hunger is Violence’; ‘Resettlement Widows Desperate’; ‘Bible Demands Justice for Widows’. This time he was able to see the Secretary for Bantu Administration and for a moment was hopeful of some amelioration. However, the Department’s cynical response was that the widows could receive their maintenance-grants of R2.50 per month but they would have to forgo the resettlement-rations. These were valued at R2.55.[6]

Russel returned to Dimbaza in April 1972 and attempted to live for six months on an African’s pension of R5 per month. At the end of every month he wrote to Botha describing his experience. After two months he was bitterly cold at night in spite of his clothes and six blankets. He was also having to drink mugs of hot water to stave off hunger. ‘At times,’ he wrote, ‘I feel quite limp and weary – listless and without zest for life. May those pause and wonder who charge the poor of “having not initiative”, of “laziness” and of “not bothering to help themselves”’. After five months he was ‘under a strain which I don’t believe I could carry much longer. I feel a great tiredness deep within me. I just do not know how Africans “manage”’.[7] Not having heard from Botha, Russel how accused him of having hardened his heart, ‘like Pharaoh’, and explained that the final sixth letter would be sent to DRC-ministers of the NGK – ‘my colleagues in Christ’s healing work’.[8]

It was when all this had been to no avail that Russell, talking things over with Francis Wilson and other close friends in the Christian Institute, decided to try the Pilgrimage to Cape Town.  When that failed to generate politically significant movement of white compassion, Russel was as nonplused as the other pilgrims. He continued his lone protest in later years and was arrested on several occasions, for example when entering African areas without a permit and when protesting at the destruction of African homes at Crossroads near Cape Town in 1976. After being banned in 1977 with other leading members of the Christian Institute, Russell broke his banning order the following year by working with the Crossroads community; again in December 1979 he defied the authorities by attending the Anglican Synod which was meeting at Grahamstown.[9]                …

[7] ‘Letters to Dimbaza‘, South African Outlook, December 1973, pp. 212-216; Cape Times, 18 May 1972. See too Pro Veritate, October 1973, pp. 11-13, a medical report on the Dimbaza rations which were comparable to those Russell was trying to survive on. They were judged to be ‘seriously deficient in calories and vitamin C, and deficient in niacin and tryptophan for women who were moderately active. The diets are more inadequate for growing teenagers, especially boys, for adult men and for pregnant, lactating or even very active women.’ Signed A.S. Truswell, Professor of Nutrition and Dietetics, Queen Elizabeth College, University of London, 25 October 1972. See too D. Cleminshaw, ‘Dimbaza Rations: a comparison with Boer War Concentration Camps’; SPROCAS discussion-paper, c. 1973, p. 216.