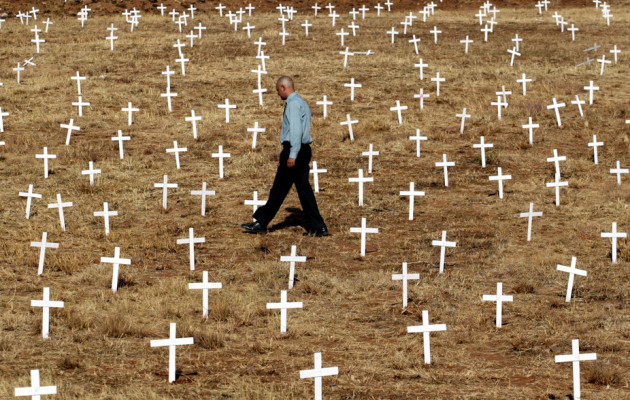 A man walks through a field of crosses erected near Pretoria, South Africa, to honour mostly white farmers who have died in. farm attacks. Reuters/Juda Ngwenya

Given the weight people place on crime as an indicator of national health in South Africa, there is an urgent need for demystification around crime trends. Anine Kriegler* and Mark Shaw* contend:

A lot of people think that violent crime in South Africa began rising in 1994 and has continued to rise since then. They are wrong. Our new book, which traces the national murder-rates of over a century, shows that the past two decades have shown unprecedented improvement in the physical safety of the vast majority of people in the country.

For many South Africans, concerns about crime are made to stand in for bigger concerns about reconciliation, the fabric of social life and the prospects for the post-apartheid state.

South Africa has very high levels of fatal violence. Its 17,805 murders recorded last year in a population of a little under 55 million make for a murder-rate of 33 per 100,000. This compares very poorly, at about five times the global average.

Official South African police statistics are an imperfect measure of crime. This is because a range of individual, social and institutional factors determine whether a given incident will be identified as criminal, reported to or detected by the police, and correctly recorded in the official statistics. These factors can all change, especially in the context of major political and economic changes. This makes it difficult to compare crime-rates between different places and times.

The typical way to mitigate the problem that so much crime goes unrecorded is to focus primarily on murder. Whereas surveys suggest that a large and variable proportion of crimes as diverse as rape and theft never make it into the official statistics, a relatively large and stable proportion of murders do. Dead bodies are hard to hide, dispute or ignore. Murder-rates are thus the dominant unit of criminological comparison.

A key advantage of murder-rates is that they can be corroborated by mortuary-records. In South Africa, comparing these sources suggests that a relatively small and probably shrinking proportion of suspected murder is failing to make it into the police-figures. There is no good reason to reject South Africa’s official murder statistics as a solid basis for comparison.

A national history of murder

In our book, “A Citizen’s Guide to Crime Trends in South Africa”, we combed through archives to put together all the official South African murder-figures we could find since 1911. We also worked out the most likely population-size within the official police-jurisdiction for each year. This made it possible to track the annual murder-rate per 100,000 people in the population for more than a century. The older the figures are, the more likely they are to be an under-count. 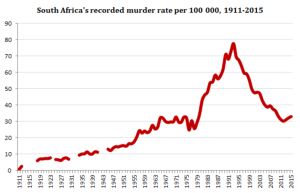 The murder-rate did not begin rising in 1994 – exactly the opposite. There was a steady increase to the 1950s, a slightly more rapid rise to the 1960s, some years of relative stability, and then a massive spike to a peak in 1993.

Then things turned around.

From 1994 onwards, the murder rate fell by an average of 4% a year. Raw figures dropped from about 74 murders a day in 1994 to 49 a day in 2015, despite a population grown by about 40%. Internationally, trends this dramatic are rare and attract major research and theoretical attention. No one has yet noted or done much to investigate it in South Africa.

Murder-rates today are not higher than ever. They have returned to about where they were in the 1970s. About 20% of the spike from the 1980s has been estimated to be directly attributable to political conflict. Periods of political and social upheaval tend to raise rates of all crimes, not just political ones. Recorded rates of other crimes like robbery and rape rose rapidly at the same time as murder did.

The strong downward trend after 1994 is confirmed in mortuary-records and in crime-victimisation surveys. These surveys also show that rates of non-fatal assault (including common assault, serious assault and attempted murder) dropped by similar margins. Fear of crime remains high and there do seem to have been increases in a number of types of robbery, so not all forms of violence have declined. However, the evidence suggests that people in South Africa are about half as likely to be physically assaulted or killed today as they were 20 years ago. This is good news.

The graph also reveals some possible bad news. The downward trend in the murder-rate seems to be slowing or even reversing as of 2012. Much of this is driven by a huge increase in violence in the City of Cape Town, but other cities have also seen slight increases in the past three years. This may imply that there are new dynamics driving violence up for the first time in the life of the “new” South Africa. The widely-held assumption that murder-rates have been going up all the while is not only incorrect, but it may be blinding us to the new problem that needs our attention.

Source: THE CONVERSATION, 22.07.2016, edited for this publication by Ben Khumalo-Seegelken.