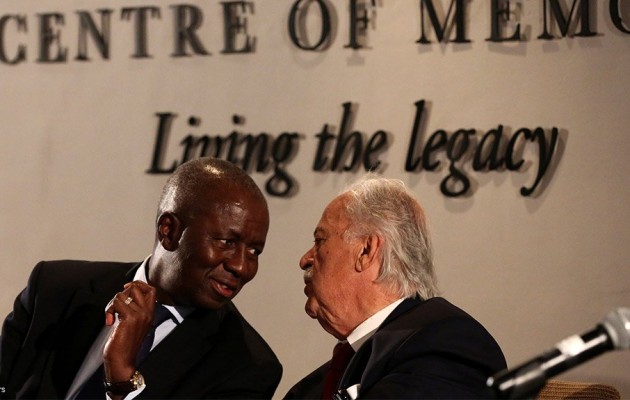 JOHANNESBURG,  Friday 20 May 2016: In a farewell-address to the Constitutional Court after 14 years, Deputy Chief Justice Dikgang Moseneke on Friday told of how he adopted the mantra of liberating himself, and later embarked on a journey to fight for freedom and defend political activists as an attorney.

Moseneke said he knew when he was released from Robben Island, after his arrest for his political activities at the age of 14, that he had to make a choice. In making those choice, he said he learnt a few lessons.

“The first lesson I learnt was that you cannot merely dream about your revolutionary ideals. You have to take real and concrete steps to pursue those legitimate ideals. The second lesson was that I was my own liberator… I copied from the revolutionary liberator, [first African National Congress Youth League president] Anton Lembede and later Robert Mangaliso Sobukwe. These leaders were urging young people of my time like me, and indeed those of the present, to pursue freedom in our life time,” Moseneke said to a round of applause from the packed public gallery. He said citizens should identify worthy causes, and ask themselves the question: “What is to be done?” famously attributed to Russian revolutionary, Vladimir Lenin.

“Then we must get up and do something which will move us closer to an idealised collective condition. I knew when I came out of Robben Island that I had to make a choice, either to skip the country and go into exile or become a combatant in the domestic struggle. I chose to do things the way I knew best – to become a lawyer of remarkable excellence, of unfailing integrity and of commitment to the broader struggle of our people in all their kinds and shapes, all colours, for an equal and just society.”

“I defended most activists you can remember, I searched and found MK-cadres in solitary confinement, protected them and defended them… I saved a number of APLA-combatants from hangings and executions in Pretoria. I have appeared in trials of AZANLA-fighters.”

Moseneke said it was a privilege to work with Chief Justice Mogoeng Mogoeng. He was blessed to work in the legal fraternity with brilliant legal minds who made the law seem easy, he said.

“Chief Justice, it was a wonderful experience to work with you, I hope that I was there to provide  supportive leadership for our judiciary. We have found each other, despite a difficult encounter, we have made common cause and principled footing…we share the love for our people as much as it is our duty to serve them,” he said.

“I say without fear or contradiction, that your integrity has been shown to be beyond questioning. You never flinched from making unpopular decisions, provided they were consistent with your honest and rigorous judgement…but sadly, much turbulence lies ahead. But that is what good pilots learn to live with. I am happy to tell our people that yours are safe hands, and I wish you well,” said a teary-eyed Moseneke.
Moseneke has been the country’s longest serving deputy chief justice, after serving under three chief justices. He delivered his last judgement on Friday for the highest court in the land.

Moseneke has written memoirs about his life, due to be published in September.