Melissa Steyn: “Whiteness Just Isn’t What It Used To Be” 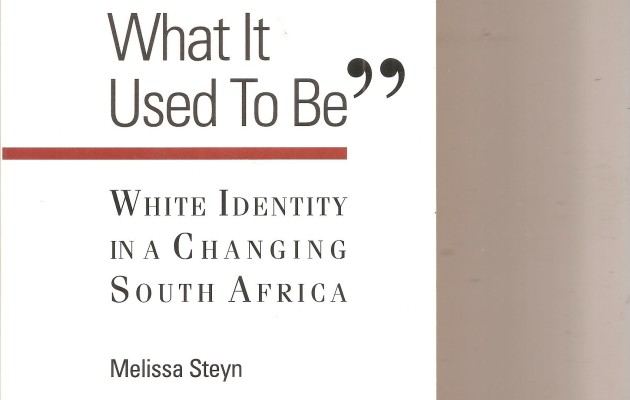 The election of 1994, which heralded the demise of Apartheid as a legally enforced institutionalization of “whiteness,” disconnected the prior moorings of social identity for most South Africans, whatever their political persuasion. In one of the most profound collective psychological experiences of the contemporary world, South Africans are renegotiating the meaning of their social positionalities.

In this book, Melissa Steyn, herself a white South African, grapples with what it means to be white, reflecting on events in her past that still resonate with her today. Her research includes discourse with more than fifty white South Africans who are faced with reinterpreting their old selves in the light of new knowledge and possibilities. Framed within current debates of postcolonialism and postmodernism, “Whiteness Just Isn’t What It Used To Be” explores how the changes in South Africa’s social and political structure are changing the white population’s identity and sense of self.

“This seriously argued and sensitive book adds a fresh perspective to the discourse on white racism in South Africa. Confronting `whiteness´ from within, Melissa Steyn charts the only journey that promises to free white South Africans in any profound way from the full implications of the nightmare of their own making.” – Njabulo S. Ndebele, author of South African Literature and Culture: Rediscovery of the Ordinary

Melissa Steyn, [2001] Director of the Professional Communication Unit at the University of Cape Town and coeditor of Cultural Synergy in South Africa: Weaving Strands of Africa and Europe.

Section Two: Shades of Whitenesses
3. Things Bad Begun: Growing up “White”
4. Narrative One: Still Colonial after All These Years
5. Narrative Two: This Shouldn’t Happen to A White
6. Narrative Three: Don’t Think White, It’s All Right
7. Narrative Four: A Whiter Shade of White
8. Narrative Five: Under African Skies (or Whites, but Not Quite)
9. Conclusion: Whiteness Just Isn’t What It Used to Be

Kommentare zu »Melissa Steyn: “Whiteness Just Isn’t What It Used To Be”«