“… finely balanced between autocracy and democracy” 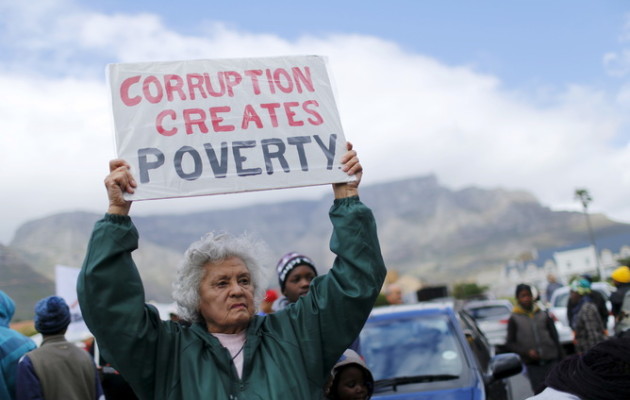 People in South Africa continue taking to the streets to demand accountability from government. Sean Gossel* observes the scene and is giving a brief account:

CAPE TOWN, 18.02.2016: South Africa has spent the last 20 years in transition, oscillating between a deepening and a reversal of democratic liberties.

Global patterns suggest that the country has a higher chance of falling back into an autocracy than becoming an established democracy. But there is still hope.

Renewed civil engagement, evident in the #ZumaMustFall and #FeesMustFall movements, among others, can put it back on track.

A period of reversal

Jacob Zuma’s presidency has been marked by increasing despondency and anger in the face of ongoing patronage and corruption scandals. His regime has seen attacks on institutions that protect civil and political rights.

It has also been marked by illogical and contradictory economic policies, racial fragmentation and deepening inequality. Consequently, commentators have expressed disappointment about South Africa’s democratic trajectory. In recent months a number of books and articles have warned about the possibility of a steady degeneration into a failed state.

These assessments are possibly realistic. But, much of the commentary is based on the implicit assumption that, after 1994, the country would miraculously follow an unidirectional path towards becoming a functioning democracy.

In reality, South Africa has never reached an embedded democratic state where political rights are supported and protected by civil liberties. Therefore, sociopolitical developments do not represent a reversal from a semi-entrenched democracy. Instead, the country’s post-apartheid experience can be assessed more realistically as an ongoing oscillation between a deepening and a reversal of democratic liberties.

In addition, most of the commentary focuses only on South Africa. This view exaggerates the country’s exceptionalism and does not take global democratic patterns into account.

Countries that experience unstable regime-shifts have various labels. Generally they are categorised as hybrids with, broadly speaking, amorphous political systems. Publicly they claim to adhere to liberal democracy. This includes having formal democratic institutions and civil and political liberties. But they simultaneously exhibit illiberal or authoritarian qualities.

• populist politics, unaccountable leadership and opaque decision-making processes;
• strong democratic institutions associated with elections;
• weak institutions that lack credibility;
• weak political participation beyond elections. This means limited government accountability, which leads to public frustration with delivery and institutions;
• conflict between formal institutions and informal practises. Formal institutions suffer from a trust deficit. Informal practices, including presidentialism, clientelism, and corruption, are entrenched and can take precedence;
• weak state capacity. State decision-making is bloated with public-sector participants;
• the state is unable to respond adequately to democratic pressures because it lacks the necessary institutional and administrative capacity; and
• political change is driven by the political elite rather than by the electorate.

As can be seen from this list, many of the challenges facing South Africa are not merely symptoms of weak governance. Rather, they are characteristics of the type of governance.

In the wake of the “third wave” of democratisation in the 1970s, there was a general sense that, globally, democracy and capitalism would continue to become the dominant form of governance. Francis Fukuyama described the dynamic as “the end of history”.

In subsequent decades numerous examples of democratic failure in many emerging countries led to a more restrained understanding. This was that elections alone cannot solve entrenched political and social problems. Accordingly, global democratisation has stalled.

Democracy scholar Larry Diamond noted recently that, since 2006, the number of democracies has remained relatively level at about 60% of the world’s states.

But since 2000 the failure rate of democracies has increased to nearly 20%. In addition, since 2005 nearly half of the 27 emerging countries in the world with large populations or large economies have experienced a reversal of democratic freedoms. This includes South Africa.

In Africa 60% of sub-Saharan states have experienced a decline. This compares with 30% that have experienced a deepening of democracy. The most common reason for the decline is bad governance associated with weakening transparency, civil liberties, corruption and rule of law.

Declining transparency and rule of law have also been noted in many countries in Latin America, post-communist Europe and Asia. And even established democracies have experienced resurgent democratic erosion.

Worryingly for South Africa, statistics show that hybrids that have lasted longer than 20 years have a higher probability of falling back into autocracy. This has happened to 29% of hybrids. 22% have become established democracies.

In nascent democracies, the development of human rights is crucial for the emergence of competitive political parties. This means that civil liberties are a precursor for political rights.

After South Africa’s transition in 1994, the country increasingly defined the health of its democracy in terms of political rights. This is not surprising, given the political instability of apartheid and the multiparty negotiations. But this led to complacency and democratic reversal because it was not balanced by civil activism.

In addition, corruption worsened as economic growth declined. This was accompanied by factional battles and a hollowing out of democratic institutions as available spoils shrank.

There is hope though. The blossoming of civil activism indicates the end of an era. Until recently South Africans believed that political leaders could guide the country out of the transitional wilderness and into the democratic promised land. No longer.

There is still the danger that the flourishing student and civil protest movements can collapse, be captured by political opportunists, or heighten race and class divisions. Nevertheless, they have entrenched democratic activism among the middle class.

They also make it more difficult to criminalise protests. This has been the common political tool to deal with service delivery and labour protests.

As these movements gain traction there is the prospect that renewed civil engagement will strengthen civil liberties and finally entrench South Africa’s constitutional democracy.