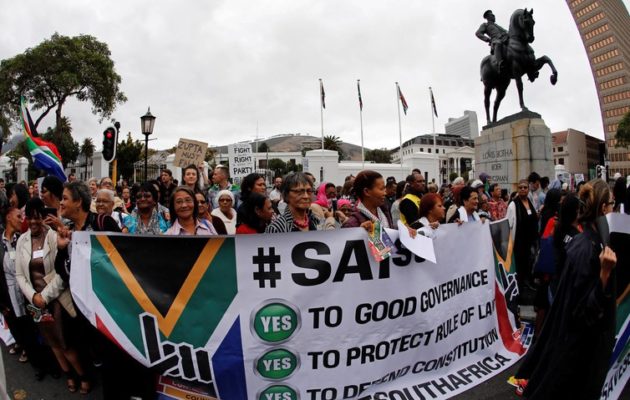 There was a time that South Africa looked very different to the rest of the world. The “rainbow nation” was seen by many – including a lot of its own citizens – to be exceptional, having more in common with the developed states of Europe than many countries elsewhere.

“But, in the wake of a series of destabilising corruption scandals, financial mismanagement and the incompetent leadership of President Jacob Zuma, this is no longer the case.” Nic Cheeseman* maintains. He contends:

It’s time therefore to look to the rest of the continent for evidence on how the crisis within the country’s ruling African National Congress (ANC) is likely to unfold.

One of South Africa’s most brilliant academic and political leaders, Neville Alexander [1936-2012], remarked as early as 1997 that time had come to embark onto long-term hard work to implement the aims and objectives of the constitution since the transitional period had come to an end: “South Africa has – in the meantime – become `a country like any other!´” (Ben Khumalo-Seegelken: Neville Alexander)

The notion of South African exceptionalism runs deep. Having suffered white-minority rule much longer than most other African states, the country had one of the most stable and successful transitions to democracy on the continent [and elsewhere]. Following the election of the ANC in 1994, Nelson Mandela’s government promoted tolerance and responsible government.

At that point, South Africa did not look very “African”.  While Nigeria was blighted by endemic corruption, the ANC was led by a man whose reputation was beyond reproach. When the ZANU-PF government was becoming increasingly brutal in Zimbabwe, Mandela’s administration was promoting the rule of law and inclusion. And just as the Democratic Republic of Congo, Rwanda and Somalia were falling apart, the South African state appeared to be growing stronger.

Moreover, the notion of exceptionalism wasn’t just something dreamt up by academics or reporters: it was also deeply felt by South Africans themselves. Some surveys have found that many believe that they are exceptional, and in some cases that they are superior to the rest of the continent. This had some positive consequences, most notably by supporting the reconstruction of a broader national identity.

But it also had its downsides. A report by the country’s Human Science Research Council into the xenophobic violence against migrants from Mozambique, Malawi, and Zimbabwe in 2008 concluded that, in addition to urban deprivation and intense competition for jobs and housing, a popular understanding of “exclusive citizenship” motivated anti-foreigner sentiment.

The xenophobic violence, and the economic conditions that gave rise to it, were a clue – for those who had their eyes open – that South Africa wasn’t really that exceptional after all.
On the one hand, a number of other countries such as Ghana and Mauritius were also doing well when it came to consolidating democracy. It was just that these positive stories tended to be ignored.

On the other, some aspects of the South African “miracle” didn’t stand up to closer scrutiny.

Before and after Zuma

After the transition to majority rule the country recorded impressive achievements in terms of its progressive constitution and growing welfare-state. But at the same time it soon became clear that many parts of the bureaucracy were prone to rent seeking behaviour.

Similarly, despite its proud history and impressive first four years in office, the ANC was already exhibiting patrimonial tendencies well before Zuma became president in 2009.

As political scientist Tom Lodge has argued, many of those who rose to prominence in the movement during the apartheid era had been born into privileged positions. And the ANC was forced to develop ties to criminal networks to operate after it was banned by the National Party in 1960 and forced into exile.

During the liberation struggle, the imperative of fighting the apartheid regime kept these patrimonial tendencies and criminal connections in check. But after the advent of democracy they started to become more pronounced.

Partly as a result, schemes such as Black Economic Empowerment were used not transform the underlying structure of the economy, but to generate opportunities for self-enrichment. South African political analyst Moeletsi Mbeki has called this “legalised corruption”.

These tendencies were then exacerbated by Zuma’s rise to power, in large part because he’s a leader that understands politics through a patrimonial lens. Lacking the intellect and management skill to lead by example, he has set about entrenching himself in power by promoting loyalists within the party and the state. This while condoning corruption and sacrificing policy for patronage. As a result, the party’s patrimonial tendencies have been sent into overdrive.

In addition to major corruption scandals over the upgrade to his homestead at Nkandla and a multi-billion dollar arms deal, Zuma has drawn fire for his close relationship to the Gupta family. He allegedly allows the family to influence major policy decisions in return for its financial support.

More recently, the president plunged the ANC into a full-blown crisis by removing many of the most competent members of the cabinet and replacing them with loyalists. As a result, South Africa’s credit-rating has been downgraded.

For many, this was the straw that broke the camel’s back. In the days that followed, a number of prominent political figures and the ANC’s partners in the triple alliance, the South African Communist Party and the Congress of South African Trade Unions (Cosatu), called on Zuma to go.

Putting this process in its historical context is important: it makes it clear that while Zuma has been a disaster, it would be naïve to think that he is the sole source of the ANC’s problems – or that his removal will solve them. It also shows that South Africa is not exceptional, and instead faces similar problems to many other countries on the continent.

One small silver lining to this cloud is that we can use the experience of other states to better understand the prospects for South Africa. One thing we know from Kenya and Nigeria is that the kind of politics practised by the president quickly embeds clientelism within key parts of the government and bureaucracy.

When this happens, it’s not enough to change just the president. Meaningful reform requires the removal, or at the very least retraining, of an entire tranche of figures put in place during the president’s tenure. Otherwise, patterns of patronage and clientelism have a way of reasserting themselves.

The experience of other states also tells us that some of the solutions that have been promoted as silver bullet solutions for South Africa’s predicament are unlikely to work. It’s been suggested that the direct election of the president (who at present is elected by the parliament would lead to more accountable and responsible government. But America just directly elected Donald Trump, while Zimbabwe continues to directly elect Robert Mugabe. Presidential elections are no panacea.

The lesson from other African countries is therefore a worrying one: the road back is a long one.

But these comparisons shouldn’t lead to defeatism. There are a number of ways in which the country remains distinctive. Civil society remains more robust than in many other states, and more independent as the Confederation of South African Trade Union’s criticism of Zuma demonstrates.

Similarly, the judiciary tends to be both of higher quality and more impartial, while the governing ANC itself has more internal checks and balances than most governments on the continent.

These features didn’t prevent the slide towards patrimonialism, and on their own they will not topple Zuma. But they are the foundations on which the struggle for a new South Africa can be fought.

Kommentare zu »South Africa – a country like any other«